Use the above links or scroll down see all to the PlayStation 3 cheats we have available for Army of Two. 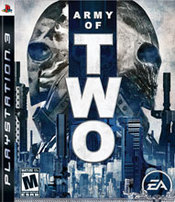 Ok, on this game if you in the market for a new gun and your short on money I'm going to tell you the best the to do. Buy a S-System and only focus on the barrel and stock until you can afford other stuff. The reason I say this is because different barrels add better damage, new stocks give you better accuracy. Then if you get a bunch of money after that, buy the 60 or 100 round clips. Pretty soon you might want to get an attachment, I suggest the grip, because this improves you accuracy even more. After that you may want to be a little quieter, purchase a silencer, but keep in mind this slightly takes away damage. Now maybe you want more protection, buy a shield for your S-SYSTEM, this will increase agro. Then the only thing left to do is to "PIMP" the gun. That adds more agro. Then you can do ever thing I've told you on other weapons, until you have them all.

When playing with the AI, when you get the M134, swap weapons & let the AI rip! The AI never runs out of ammo and on aggro when given the command to advance, will clear-out a room full of bad guys.

Start the China mission and complete the first objective for $30,000. After you have successfully completed the objective, quit and reload the mission for another $30,000. You may have to walk back down the mountain for the money to be given to you. This can be redone as many times as desired.

Throw a grenade in front of your enemy to knock him down. Before he gets back up, either shoot him until he is dead or have the grenade launcher as your frontmount and use one of them to take him out. Depending on the area you are out will change the difficulty of doing this. Remember to use the aggro system to your advantage.

You will get money for picking up a briefcase. Each briefcase can only be collected once and will disappear in future playthroughs. Pause game play and select the "Objective" option to check many briefcases you have collected for the current level. Note: You do not have to collect all briefcase in your first playthrough. You can find missed briefcases during subsequent playthroughs.

After skipping a ladder and jumping too far above the ground, press [Roll] to take no damage.

How To Kill A Heavy Solider Easy

If you have a stinger, use it to kill the heavy solider. It locks on.

Beat the game on the Recruit or Contractor.

Beat the game on Professional.

Beat the game once on Recruit or Contractor

We have no easter eggs for Army of Two yet. If you have any unlockables please submit them.

We have no glitches for Army of Two yet. If you have any unlockables please submit them.

We have no achievements or trophies for Army of Two yet. If you have any unlockables please submit them.

Submit a cheat for Army of Two