Use the above links or scroll down see all to the PlayStation 3 cheats we have available for Battlefield 3. 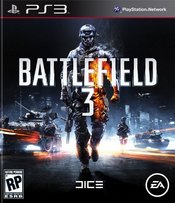 1 . This is not Call of Duty
Yes, this was mentioned earlier, but there should be a little more emphasis on this. Call of Duty‘s shooter experience is more geared toward the players who enjoy constant action. If you think about it, the average lifespan of a player (excluding players like Sandy Ravage) can be just under 60 seconds or so. Not to discount that CoD is capable of tactical play, but if you’re running around the areas where people usually frequent, gun fights are bound to happen 90% of the time. Map size has a lot to do with this.
When playing Battlefield 3, there are often times where enemies may not be encountered for quite a while, and you might want to just sprint toward the action as soon as possible. The problem with that kind of approach is if you die, then you have to start all over from far away (or maybe not, if you spawn on a squad member), resulting in you wanting to get all the way back to the action because you might be mad you were killed. Then you die again. The cycle repeats and then, all of a sudden, your team is out of tickets (if you’re attacking).
Being patient is one of the tenants of playing Battlefield games, the sooner you get used to it, the sooner you can excel. Players shouldn’t be worried about their K/D ratio and more focused on supporting the team and helping contribute to overall victory.

2. Play your class
A pivotal part in Battlefield 3, like its predecessors, are the different classes. Each class is meant to do something specific and it would be wise to play your class the way it was meant to be played. The four classes: Assault, Recon, Support, and Engineer are all capable of shooting the other team, but they all have different jobs that support the team in other ways. For example, the Assault class, which has also taken on the role of Medic, are on the front lines and there to assist other players who might have been downed by resuscitating them. If someone goes down or requests health, use your class kit. You aid the team and you get points, win-win. Keeping players up or reviving them goes a long way to making your respawn tickets count.
The same could be said with the Support class, who can dish out ammo like it was going out of style. Support classes are capable of providing an unlimited amount of ammo and grenades to teammates. In addition to providing ammo, Support is also capable of utilizing the LMG to provide large amounts of suppressive fire, a new feature to the game which awards players for doing so and at the same time, negatively impacts the opposing player under fire. Remember, it’s about the team victory, not being greedy with K/D.
Throughout each map, you will notice several crates or containers dotting certain areas, these are choke points. Utilizing the LMG’s bi-pod (going prone or setting up near a container), laying out ammo, and coordinating with teammates can result in effectively holding a position indefinitely.
If you decide to play an Engineer, your primary objectives involve friendly vehicle upkeep and destruction of enemy vehicles. Any vehicle in Battlefield 3 can make the difference between victory and loss in any skirmish, so keeping them functioning is very important. Stay close to vehicles and be mindful of when they get destroyed. Vehicles do respawn, but it takes time. Why bother waiting when you can repair? Also, killing enemy with a blowtorch is just as fun as killing them with a defibrillator.
One note for Engineers, do not run around with your flashlight on all the time when near teammates. It blinds everyone, not just enemies. Not only that, it will also give away your position pretty easily in close quarter scenarios. If you want to utilize if properly, use it as a defensive measure to blind an enemy once you get the drop on him.
Lastly, the Recon class is just that, recon. Whether you opt to snipe or run with a SMG/PDW, getting in and laying down a Radio Beacon to aid closer team spawns, utilizing motion sensors near objectives or choke points, or using the laser designator to tag enemy armor is all important. Stay mobile and stay alive, Recon can usually serve as a good class to spawn on because of their relative closeness, provided they don’t get killed because someone saw their scope glint.
Each class is geared to excel at certain tasks, play each one and figure out what you like the best. Just remember, when you play in squads, it’s not entirely beneficial to have nothing but Recon. Just saying.

3. Teamwork, teamwork, teamwork
As noted earlier, Battlefield 3 is a game about teamwork. Lone wolves do not excel as much as they do in Call of Duty. The best way to victory is coordinate and communicate with your squad to attack/defend objectives. If you’re going to be laying down suppressive fire as Support by X location, tell your team. If you go down, tell your team. Being able to work together is a huge part of Battlefield.
Keep an eye on whether or not your team needs ammo or health and help them out. Performing supportive actions in Battlefield 3 can get you as many points as someone with a high K/D, or even more.
Don’t forget to spot enemies. Enemies do pop up on the radar if they shoot or if they’re in the vicinity of a motion sensor, otherwise, they don’t. Spotting enemies and vehicles goes a long way, especially if you end up shooting someone, but not killing them.

4. Utilize fire selection options.
Weapons in Battlefield 3 come with fire selection options, allowing users to switch from full auto, single fire, and for some weapons, 3-round burst. Depending on the weapon system being used, bullet drop will also come into play. What does that mean? It’s going to be a bit more advantageous to use single fire on an enemy that’s further away than fully automatic fire. On the other end of the spectrum, using automatic fire in close quarters is going to be more effective, unless you can spam that trigger pretty fast.
Using single fire is also good to help conserve ammunition, which can deplete pretty quickly in Battlefield 3. It’s not necessary, but it can make a difference.
Bonus tip: Don’t forget about your pistol. If you’re in a gun fight and your primary weapon runs out of ammo, it’s faster to switch to your secondary and engage with it than it is to reload.

5. Vehicles have more than one seat.
Probably one of the more annoying things that players encounter while playing Battlefield 3 is one person hopping into a vehicle and leaving everyone behind to grudgingly sprint their way to the action, so be nice. At a match’s outset, if you’re driving, wait and see if people hop in with you. That extra person might be an Engineer who can help repair it or someone who will operate the turret.
The point is, don’t leave your teammates running all the way to the action when they can hop into a vehicle and be driven there. Having an extra person or two near the objective can make all the difference.
While these tips might seem self evident, they’re also serving as reminders and food for thought. Battlefield 3 can be an in-depth game with a lot going on, but the team experience can only be enjoyed if you act as a team player. Just remember, have fun.
By: Sniiper King I on Xbox Live.

Yes, we know it's a pretty short video - but it packs a lot of punch in that short amount of time. This is a trailer of the Operation Metro mission!

We have no cheats or codes for Battlefield 3 yet. If you have any unlockables please submit them.

We have no unlockables for Battlefield 3 yet. If you have any unlockables please submit them.

We have no easter eggs for Battlefield 3 yet. If you have any unlockables please submit them.

We have no glitches for Battlefield 3 yet. If you have any unlockables please submit them.

Back To Karkland Trophy Guide

DLC Trophies: Back To Karkand

Submit a cheat for Battlefield 3