Use the above links or scroll down see all to the Wii cheats we have available for Bond 007: Quantum of Solace. 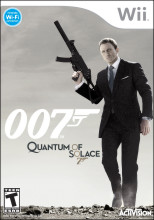 When your in the shootout in the gondola workshop you no with the gondola hanging from. Com that rig try to sneak your way into the room on the second story right before the starecase if you look to your left when you walk in thers a case with a big old west six shooter.

In Almost every level there is a yellow case and depending on what level it is, the weapon inside will help you with an inpending boss at the end of the mission. These are the ones I found: Whites Estate when your in the long hallway ther one room with an open door theres a case.
At the opera on that on that building right after your walking on the set and you have to balance walk then jump down and then the next time you jump down your on the dock at the far end of that area theres a case
Then a while later in the science center outside as your going up the terraces a guard will open adoor and come out shooting kill em then go in the room theres a case In the airport before you go in the actual hanger the office with the door open in there their is a case.

Unfortunatly Q got lazy and didnt give us any gadgets to play with except for bonds phone as I said the phone amazingly helpful if you no how to use it first to get out your phone press - then the majority of the screen isa map all the lines and formations are walls and doors the big blac and white circle is the checkpoint but the most important thing is the triangles the white one is you the blue ones are friends or people that are fighting the same enemy as you the green ones are enemies that don't no your there (Try to keep it that way) the yellow ones are enemies that spotted you but arent sure about it (i would either kill the asap or get in cover and don't move) the red ones no your there and want you dead and will try tomake it that way if a triangle has to cresents in front of it hes talking (dont kill a talking enemy cause the person hes talking to well send a patalion of enemies to investigate and then your in an engagement) if a triangle has oone cresent around it there shooting so unless your in good cover you shouldnt be worrying about your phone now use this stuff because spotting a wondering gaurd on you phone is the difference between taking everyone out without getting noticed and doing it the hard way.

At the end of the eco hotel which is the end of the game awww first after your blasted twenty feet back which is totally phisically possible Greene moves in now if your reading this you probably figured out that a hed shot with your A3 RAKER won't kill him but if you widen your view you'll see a hole in the wall that is filled with liquid oxygen tanks shoot it boom he dashes to his next spot right above him are some more tanks shoot em boom greene meet the devil devil greene meet but if you can't size up to theese tanks before aguard shoots you if you look to your right theres a bar and almost achristmas present an ammo box run get in cover replenish your weapons and health and go back when your ready.

I can't count the number of times that I was found someone sounded an alarm and got into an endless firefight but the worst (and best) thing about it is it can be avoided all that you have to do is find cover (where nobody will find you pull out your phone and look at the map the red arrows are enemys and the way that their pointing is the coresponding enemys line of sight and if you see a red field thats a cameras view stay out of both these and your golden it also helps to crouch do take downs and just in case you have to shoot silence your P99 Magnum.

Best Pistols To Use In Wi-fi

Pistols are a great weapon to use up close to someone, if you use the right one. The best MI6 pistol is the 1911. 45, or aka, "silver pistol, " It doesn't shoot near as fast as the P99, but one shot to the head kills instantly, unless on bomber and defender characters. The best pistol for the organization is the GF18 Auto, except when you are against the defender or bomber, where you have to use the LTK magnum and shoot at the head like said above. HINT: The LTK magnum takes longer to reload and holds less bullets, so take cover in a hiding spot while reloading.

A Way To Get Less Deaths

When you are in an obstacle-filled course, hide, then get a kill while hiding, then move to a different hiding spot close to your last hiding spot. It helps you get more kills and less deaths. (For use in wi-fi games, best at airport and facility. ).

If you aren't very successful at the Shanty Town map on wi-fi, this cheat is for you. You know where MI6 usually respawns, in that house opposite from the broken eating place? If you walk out the front door, go down the steps, take a left and go back towards the end of the second huge storage box that is slanted upwards. Turn to your left, you should see a window with a barrell beside and under it. Jump onto the barrel, and stay on the edge af the barrell farthest away from the window. Then, jump onto the window sill at the edge. When you see the top of the roof, you know that you're on the sill. Then crouch down and walk through the window. It is an easy task for more experienced gamers. It takes a few tries to get it at first.

If you are in a fight with many enemies that will take a long time to kill (like the part where you have to kill Greene) find an ammo box and take cover next to it. When you run out you don't have to worry about running around out of cover trying to find a dead guy's ammo you can just hit + (or - depending on your control type) and you have full ammo for all your weapons, not to mention you never went out of you way or risked your life to get ammo.

Killing without a Weapon

On level one there is a part when you have to sneak up on a guy and kill him with no weapons. Don't go up to him - just shoot the floor that is closed in the middle of the room... when it opens he will be dead.

We have no cheats or codes for Bond 007: Quantum of Solace yet. If you have any unlockables please submit them.

Complete the game on 007 agent and you will be able to go to the options menu and turn on infinite ammo.

We have no easter eggs for Bond 007: Quantum of Solace yet. If you have any unlockables please submit them.

Shanty Town: (be a Scout) First cheat is, If you see the stair case, by the big lake, Then you got a cheat. OK, when you walk up the stairs, keep on walking until you get to the barrel, the most barrel closest to the Corner of the roof. Jump on the barrel, then keep on jumping till you hit the corner, you also might notice you can't walk all the way through. I know, you have to keep walking slowly on the edge of the roof. Until you hit the other roof, when you do, then you can jump down into the water.
Parking Lot: The only cheat here is, you know the roof that has all those big Machines on top? Or air vents to be exact? OK, well the ladder that leads up there, has another side to it. Go inside the building. Then walk around until you are on the other side of the ladder. Touch the wall, then you'll be on the other side, CLIMBING A LADDER! This is for very easy noob spots.
Airport: There's one computer that has a glitch on it. It's in the middle of the two stairs. Near, the big Square.

We have no guides or FAQs for Bond 007: Quantum of Solace yet. If you have any unlockables please submit them.

Submit a cheat for Bond 007: Quantum of Solace