Use the above links or scroll down see all to the Xbox 360 cheats we have available for Call of Duty 2. 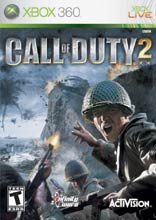 Picking Up An MG42

On the mission crossing the Rhine after you destroy the first flak gun and you come around a corner and a guy will be carrying an mg42. Kill him before he sets it up and you should be able to pick it up for your first or secondary weapon.

When you are playing the Battle for Hill 400. Do not hide in the hallway to the bunker entrance. You will have grenades thrown at you from no one. The only time you will be able to hide here is when there is an artillery barrage.

If you've tried getting to the top of hill 400 in veteran mode, you know how hard it is, heres the easiest way. Once you've passed all the obstacles and finally reached hill400, you should go to the side of the hill where your standing east of the bunkers entrance, from there throw a smoke grenade and run up and throw a few grenades at the germans behind the crates and hurry into the door.

In the cemetery there is a hut. In the hut are some boxes. Jump on the low box next to the window, then jump towards the window facing the wall. As you are about to hit the window, crouch and you can go out the window. You can shoot from that side of the hut. There is also a tractor there. You can jump up the front of the tractor then jump on to the roof of the hut. This is a very good sniping location, but you can be shot if spotted.

Go where the turret is in the building that is not blown up. Climb on the ledge of the turret. Look to the right and hug the wall tightly while moving forward. Once you go a very short distance onto the invisible ledge next to the shutter, run and jump onto the roof ledge in front of you. Look to the right and jump through the shutters. You will be in a room where you can see out from, but other people cannot see you. Note: You must climb on the window ledge a certain distance to shoot out and throw grenades.

Whenever you have the chance, pick up a Kak 98. It is one of the most powerful guns in the game. There is a scoped-Kak 98 in the last level (Dragon's Teeth) in the 2 bunker in the building. The most common bolt-action rifle is one of the best weapons for small groups of enemies. It may be a bolt-action, but it is a one-hit kill almost all the time. Make sure to keep an automatic for the slow reload.

This trick requires two players in multi-player mode. Have player one go to system link and create a game on Call Of Duty 2. Choose a level and set the times (30, 45, or 60 minutes) and other parameters. Remain at the screen and do not start the game. Have player two start a different game, such as Perfect Dark Zero or an arcade game (so you do not have to change discs). Then, have player two invite player one to his game. Have player one accepts the invite, but when prompted to log out select "No". You should now be the host of the game and it will be set to the way you want it.

The grenade indicator is useful, however, you do not have to run away from it every time. If the indicator points that a grenade has landed near you, but you are taking cover behind a wall, you do not need to run away. Instead, the grenade will explode and not damage you at all.

When playing online, have one grenade. Hold it in your hand and release it. When you release it, hold Down and it should say that you have 0 grenades remaining. Now every time you want to throw a grenade, press Throw. When you throw, press Down and your grenade count should be a negative number.

When everyone has a sniper rifle, use that same gun. When you are killed, view the replay of your death. When they shoot, directly after that, respawn. Your player should now be reloading.

You will first need to find the gun for which you would like unlimited ammunition. This trick works for only one type of gun. After you have chosen a gun, find the exact gun on an ally or enemy, then kill him. After he is dead, his gun will appear on the ground. When walking over the gun it will say you have received that weapon's ammunition. If you have full ammunition, waste a few shots then pick up another of that same gun. However, this time the gun will stay on the ground. You can keep walking over the same gun on the ground repeatedly for more ammunition each time.

There is a dome with a ladder next to it. Climb up to get onto the ledge. This trick requires two players and you must be able to talk to each other. Have a player climb on the ladder as far up as they can without taking their gun out and walking off. Then, have the other player climb up the ladder. As the player climbing up the ladder hits the person at the top, have both players press Left Analog-stick Up and look at the dome with the other Analog-stick. You should keep going up until you fall onto the roof part or inside the dome. Note: To go up high enough to get inside the dome, this action needs to be timed perfectly. It is very difficult and time consuming if not done properly Once in the dome, you cannot be shot unless you step outside. You can shoot out and grenades cannot hit you.

Determining If Enemies Are Still Alive

Even if you shoot the enemy, he may still be alive. Make sure to aim your crosshairs at him and see if it turns red. If it does, it indicates that the enemy is still alive, and you must shoot him down more. Do not give the enemy the chance to shoot you from behind while he regains consciousness.

In Veteran mode, your life expectancy is cut to three or four shots until you die. However, Veteran mode does not improve the enemy's aim or strategy. Use small blocks or small bulges of hills as cover and crawl, because you do not get points for kills, so do not take the Nazis head on. Let your allies lay some fire, if there are any. If not, throw a smoke grenade and shift between crouch and crawl positions, laying cover fire and stall some time for the smoke grenade to spread before the Nazis rush in. Use this smoke cover to fall back to the nearest safe position where you can regroup or hide and pick the Nazis off from afar.

Pause gameplay, and press: B, B, A, Triangle, X. You should get unlimited ammo for all weapons such as the Germans weapons as well.

In the select Mission screen hold LB+RB then press Left(2), Right(2), Y(2) and all missions will unlock. After starting a mission the cheat will unactivate and type it in again to replay any levels not completed.

We have no unlockables for Call of Duty 2 yet. If you have any unlockables please submit them.

We have no easter eggs for Call of Duty 2 yet. If you have any unlockables please submit them.

First, select the D- Day mission in the mission select menu. Once you are in the level you will start out in a small boat. When you run out of the boat you will get hurt, that is normal and there is no way to avoid that. Find where you climb up the hill with the rope, and climb to the top. When at the top you will see a circle some stuff in the middle; once you are safe from gunshots and grenades lay down in the bottom and slowly slide to the right until you reach the wall. Once you hit the wall you will start to go through the it and fall to a invisible ground under the level. You will get a little hurt, but not enough to kill you. Once, you are under the level you can shoot people and throw grenades at people but they cannot harm you. Congratulations! You have done the D-Day Glitch!

In Rommels Last Stand, In Retaking Toujane, when you are eliminating the Flak 88 crews, continue until you see the enemy tank and your tank fight. Go next to the enemy tank and jump off the wall to the right of it. When you do that, turn around and you can walk through the wall and end up under the level and you can throw frag grenages above ground while your under there.

We have no guides or FAQs for Call of Duty 2 yet. If you have any unlockables please submit them.

Submit a cheat for Call of Duty 2