Use the above links or scroll down see all to the Xbox 360 cheats we have available for Call of Duty: Black Ops II. 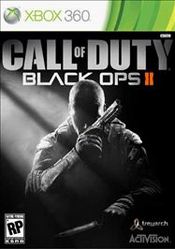 How To Get The Ray Gun Rpd Or Hammer

When you get to the mystery box, open it. When the question mark gets really bright, then knife the bow really fast.

First, Tranzit. When you spawn in the bus station, go outside, and look at the benches. He is on one of the 3 benches. The next bear is at the Farm. Unlock the door to the house, go upstairs, and the bear should be sitting on a mattress against the wall. The final one is at Town inside the bar. He is sitting on a seat on the lower floor, on the opposite side where you build the Jetgun. By activating all 3 of these (holding down X near it), you get a song playing. I DO NOT KNOW THE NAME OF THESE SONGS! Next, Die Rise. First, buy the door at the spawn. Walk to the far wall, and turn right. You will need to jump down to the lower room, and you will see a door. Instead of buying it, turn right through a doorway. At the end of the room, you will see the SVU-AS on the wall. The bear is on a shelf to its right. To get the next bear, go down from this room and turn right down a hallway. DO NOT WALK DOWN THE HALLWAY! Instead, go all the way across until you will fall off the edge and turn right. There is a small ledge. Walk down it and down a slide at the end. This will bring you to a room with the mystery box. Leave the room, turn left, and parcour down all the way into a room with the AN-94. Buy the barrier into a new room, and jump down to the floor. There is a pole leading up to the ledge with the bear on it. The final bear is in the room where you turn on the power, against the left wall on a sowing machine. If there is a new DLC, I will post the teddy bear locations in a different post. PLEASE SUBMIT COMMENTS DESCRIBING HOW HELPFUL THIS WAS.

Always Get The Ray Gun

In Green Run on Farm buy the MP5 then kill all the zombies but one and go to the mystery box and shoot the latch with one bullet and activate the box and you will get the ray gun if you run out of ammo repeat.

Get Points On Zombies In The First 3 Rounds or Less.

You will have to go back and fourth for this transmission. Go to TranZit. Next, head for the farm unlock the gate and house. There should be a tv fizzing, hold x and it will stop. Step 2: Go to the power station, activate the power. Step 3: Head back to the farm to and to the tv. Hold x. Then theres the secret transmission.

On the level where you kill Alex Mason, shoot him in the leg instead of the head. Later on, when you beat the game, Alex Mason is still alive.

Easy Way To Get You To a High Round

First you need a Ray gun & a RPG & 5000 points go to the mystery box kill a zombie while jumping on the mystery box hold x then you get the thunder gun it doesn't work all the time.

Where All The Parts are for the Sligufier

Okay to get all the parts for the sligufier
1: you have to get the part on a container next to a couch that is across from the sligufier bench ( you can buy this couch so it can get out of the way. It cost's $1000. ) and if it is not there you go to a bench and you can go to it by going down the elevator next to your spawn point. And the part looks like wires.
2: there is another part and you can get to it by going up the stairs where you move the couch and then once you get around the fence you turn around and there will be a tiny couch and a t.v. Across it there will be a part in the middle of the little room. And the part looks like a trigger.
3: there will be a part next to the sligufier bench it is in the bottom right side, the part is inside a little contanier it look's like a red bottle and if the part is not there you will have to look on a table that is in the power room. You should see it once you see the power switch.
4: and there is another part that looks like a trigger for a hose. The part will be in a little kitchen. You will have to go to the sligufier bench then turn left then keep going until you see a little kitchen looking like place. Then you will go forward then you should see the hose trigger looking part. And if the part is not there you have to go to the power room then go to the power switch then turn right you go until you get to the table at the very end. And then you go to the right and then look at the corner of the table then you should see the hose trigger looking part.
5: ENJOY THE SLIGUFIER.

When reloading any gun, when you are almost done switch to your other weapon and then switch back to the gun you were reloading and you should be done (has to be timed correctly so it may not work every time).

To save a few bullets in the first 5 rounds, check the round number. The round number until round 5 will indicate the number of times it would take to kill a zombie. (round 1 takes 1 cut, round 2 takes 3 etc.)

First if more than1 person in the game 1 pack-a-punches the m1911 (startting gun)2ndgets jug 3rb gets the box 4th quick revive. Not 4 people in the game skip the step and do it when you r done. If you r on ur own do the 3rd step last. Also it helps if you run in a circle and kill all of them at once.

We have no cheats or codes for Call of Duty: Black Ops II yet. If you have any unlockables please submit them.

We have no unlockables for Call of Duty: Black Ops II yet. If you have any unlockables please submit them.

You can play Atari on the television that's in the center of Nuketown. To do it, you have to go into a custom match mode, either by yourself or with friends. When the match starts you have two minutes to shoot off every mannequin head. There are about 20 of them, and every time you try, they will randomly spawn. Always look outside of the map too!

Buy the M14. Wedge yourself between the car and the gate beside you. Look all the way down. Shoot their feet.

Gather all the pieces to make a turbine. Get to the bus and take it all the way to the 3rd stop where the ak40u is at. Go inside that small house where the ak40u gun is at. Go in side and find all the parts and build the power. Take out your turbine and go towards the power switch and keep walking then turn around until you see the inside of the power switch then move to the left a little bit. All the zombies should be going towards the corner of the table and they wont be able to get you.

We have no guides or FAQs for Call of Duty: Black Ops II yet. If you have any unlockables please submit them.

Submit a cheat for Call of Duty: Black Ops II