Use the above links or scroll down see all to the PC cheats we have available for Call of Duty: Black Ops. 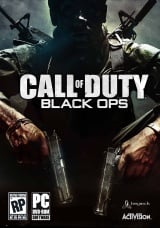 After you interogate the guy, throw 2 grenades then look for a little cpu room, find a cosete player, then hold the action button. Continue through the level until you get to the room behind the fridge. Look to your left and you will see another cosete player. Hold action button again. Weird noises will apear then wait and the thunder gun will appearjump on the crates and hold action button

1: It is lying against the wall near the west corner of the hut, right before you knife the guy in the back and just after knifing someone else in their sleep after climbing through a window with Woods.
2: On the ground inside the hut at the end of the village - straight ahead from where you enter the village. The Intel is located in the east corner of the hut. The village is just after the river area you swim through and plant explosives.
3: In the left tunnel after Reznov helps you move a barrier blocking the path to the next tunnel. After you lead the way, instead of going straight, go to the left and it is lying on the ground against a rock on the right-hand side of the tunnel.

1: On a table with a lantern and files in the 2 story building you come across about halfway through the mission. There are two snowplows outside the entrance.
2: On a table next to a cabinet in the hangar with a rocket in it. In a room in the back right corner that to get to you need to pass through this hangar to continue the mission.
3. On a pallet that is almost completely covered in snow at the end of the ship. Right before the stairs to the right. You must grab this Intel before you use the rope to get off the ship and before time runs out.

1: At the beginning of the level after you have interrogate Clarke. On a desk in the back right corner behind you. You must grab this Intel quickly before the gas kills you.
2: Lying on the ground in front of a shack with garbage all around. Just after you slide down the metal roofing, and the game goes into slow-motion so you can kill the enemies that appear.
3: On the metal roofing with garbage as you descend after Clarke gets shot in the head - just before the end of the level where you slide down plywood.

1; On the table in the security room after you breach the room where Reznov is at. There is also a projector in the room.
2: In the building down the street from when you first used the radio to call in air support - it's on a table that also has a TV on it. 3: In the building on a table in the corner. The building is at the end of the mission where you have to defend the LZ. You have to get it before the enemy shows up.

1: On the 3rd floor of the Comm building on the right table that is underneath 4 televisions and the gold emblem.
2: In the far left corder of the control room for the rocket - after you blow a hole in the wall.
3: Inside a control room (a different one) underground on top of the radar computer below the window.

1: On top of the cabinet on the 2nd floor of the 1st building you go in with Reznov after the prisoners take out the tower after moving along the train yard behind cover
2: In the armory on the table with some radios. The armory is the one just after Sergei is killed holding the security door open for you and the other prisoners.
3:In the building you start in after the cutscene from being gassed - on the bottom shelf of a rack near the back of the building.

1: Just behind the first shipping container you come across, lying on the ground under the door. It is right before you need to use the Valkyrie Rockets to take out the two helicopters above you.
2: In the second room you enter when you are inside the ship under the table in front of you with a bunch of crates as you enter on the other side of it. This room is after the locker room.
3: In the office room at the end of the mission before you fight Dragovich, under the left desk with the phone. This office room is right next to the control room which is flooded on the lower level -- the room you enter just after going up the stairs.

1: On top of a vending machine in the first hallway to your left after you have broken out of the chair and stumble through the doors.
2: Inside the trash can to the right on the left side of the wall after you exit a room that triggers a long flashback cutscene. This is right after the first one for this mission.
3: On the desk to the left inside of the first office room you come across after you have a flashback with JFK as you head down the long hallway with the rocket taking off in the background.

1: Lying on the ground next to the crate to your left as you exit the shipping container that you were hiding in. Kill the enemy in front of you then grab the Intel then move fast so you do not get spotted from the helicopter.
2: On the cage with a monkey in it inside of the containment unit in the center of the room. Do not shoot the enemy inside; instead knife him. If you shoot him, the containment unit will close, making it impossible to grab the Intel located inside of it. However, if you make this mistake, simply die, and start from the last checkpoint to try again.
3: It is shortly after you have put on the gas mask when the area gets gassed with Nova 6. You will first pass through one house, and then continue up the road to reach the next checkpoint. Before you go into the next house with the checkpoint, there is a house in front of it to the right that contains the Intel. It is sitting on the cabinet with a bunch of pots.

1: On a shelf inside the large ammunition room you enter after going through the left or right tunnel when you escape. The intel iis on the right side of the room. You must grab this Intel before continuing and exiting the underground area with Woods.
2: On the table with a radio to the right of the tent when you exit the underground area. You must grab this Intel before getting in the helicopter with Woods.
3: Right after you have freed the POWs. It is on a crate in the area to the far left just before you reach the building where Kravchenko is inside on the second floor.

1: The intel is where you breach the barracks with your squad the second time that you leave Blackbird. Down the steps to the left on the desk as you enter the barracks.
2: On a bench inside of the utility room located in the communications tower, on the second level, which is the level you enter the door from at the far left corner and right before you head down the stairs.
3: On a table with explosives in front of the office that is inside of the large warehouse with explosives everywhere else. You can grab this Intel before or after entering the office. However, it is easier to get it before entering since there is not any resistance.

1: On a crate next to the barrels at the beginning of the mission, just before you get on the boat and after the helicopter.
2: Right after you get off the boat, it is lying on the right side of the dirt path in front of you next to a rock as you follow your squad towards your next objective.
3: On a rock just below the crashed plane. When you start to get down from the wing, it is right below you before you enter the plane.

1: On the creat in the building after going up a hill and passing the weapons depot, then straight ahead with Woods and Bowman in front of you.
2: On the dresser in a bedroom that has a TV and a bed - just after killing the fake Castro.
3: On top of the ladder inside of the first hanger just after you repel down from the mountain to the airfield.

You can use the Unix command "WHO" to display a list of login names that you can then use with the RLOGIN command.

To get to the terminal, at the main menu, hit "right" and "left" trigger at least 5 times continuously to escape from the chair. Then go behind the chair and examine the black wall - you'll find a small black and white terminal. You can you the on-screen keyboard to enter cheats. You can enter "HELP" for more commands.

If you beat the game (on any level) you unlock Zombie Mode - But you can also unlock it by going to the cheat terminal and entering: 3ARC UNLOCK

To get to the virtual therapist named Alicia, when you're at the terminal, enter ALICIA. This is based on the old computer program called Eliza.

To do a login, you need to type in LOGIN and the user's name and password. The list of users, login name, and passwords are below:

When you're signed in as them, you can read their email and view their files (with CAT and DIR commands).

To access the cheat terminal with Majestic 12 access level (MJ12), you need to enter: RLOGIN DREAMLAND. Once that's entered, you can access MJ12 Users accounts with the following information:

To unlock zombie mode, you must beat the opponent in the game (or enter the code).

Enter the cheat code: 3ARC INTEL Note, that using any of the cheats (or cheat codes) will turn off trophies/achievements for Black Ops.

The cheat code to play Zork is to enter: ZORK

We have no easter eggs for Call of Duty: Black Ops yet. If you have any unlockables please submit them.

We have no glitches for Call of Duty: Black Ops yet. If you have any unlockables please submit them.

We have no achievements or trophies for Call of Duty: Black Ops yet. If you have any unlockables please submit them.

Submit a cheat for Call of Duty: Black Ops