Use the above links or scroll down see all to the PlayStation 3 cheats we have available for Dead Space 2. 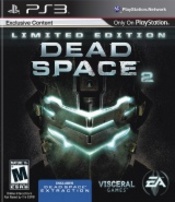 We have no tips for Dead Space 2 yet. If you have any unlockables please submit them.

Go to the final room in Chapter 15 (where there is a bench/store and also a save point). Next, go back down the corridor and go to the room with the two power nodes, a RUBY semi-conductor and a few other things. Collect everything and then return to the save point. Save your game and reload it - when you go back to the locked Node room, the stuff will be there again. You can then collect them, and repeat as many times as you like. There are a few other chapters where you can do this same thing! (6 and 7).

If you want free credits (unlimited supply), you first need to get the Supernova DLC or the Martial Law DLC packs. With those you can get the Detonator weapon at the store for no cost. Go and get it, then shoot the mines at a wall. Next, deactivate them, and then go get them but DON'T RELOAD. Now take the mines back to the store and sell them back and the Detonator too. You can then buy it again for free and it is fully loaded with mines again! BOOM - FREE CREDITS!

Clear the game with any of the difficultys and you can use the save game as New Game +. This lets you play the game from the beginning with all your saved wepons and inventory! Making things much more interesting.

Clear the campaign game on any difficulty and you'll unlock "Hardcore" difficulty level. This is the same as "Zealot" difficulty, but you're only allowed to restart from the last save game and you're ONLY allowed THREE saves for the whole campaign.

We have no easter eggs for Dead Space 2 yet. If you have any unlockables please submit them.

We have no glitches for Dead Space 2 yet. If you have any unlockables please submit them.

We have no guides or FAQs for Dead Space 2 yet. If you have any unlockables please submit them.

Submit a cheat for Dead Space 2