Use the above links or scroll down see all to the GameCube cheats we have available for Madden NFL 2003. 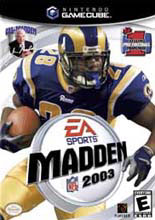 Make it the last monday in May and John Madden will say memorial day commentary.

Dancing Into The Endzone

When your player is wide open, press L or R before running into the endzone and your player will do a dance.

To have your created player last longer in franchise mode, then when you create your make his age 18 and years pro at rookie.

If you go to mini-camp you can get Madden cards and learn when to do a drill. Then challenge your self to the ultiment test.

Trade and edit all of the players that you want on the main menu roster option. Then start a franchise with that team and your team will be there.

Go to the view roster menu, select a team and go through the roster making everone's overall stats twelve.

Set the system date to December 25 to hear Christmas commentary.

Set the system date to the third Thursday in November to hear Thanksgiving commentary.

While at any menu screen, hold the Y button (the help menu will appear), and press R or L to cycle forward or backward through the songs.