Get the latest Marvel Nemesis: Rise of the Imperfects cheats, codes, unlockables, hints, Easter eggs, glitches, tips, tricks, hacks, downloads, hints, guides, FAQs, walkthroughs, and more for GameCube (GameCube). CheatCodes.com has all you need to win every game you play!

Use the above links or scroll down see all to the GameCube cheats we have available for Marvel Nemesis: Rise of the Imperfects. 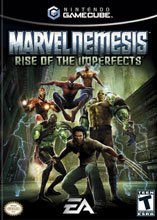 Before you start story mode, you should probably practice. Just fight an apponent in vs. mode. If you are a beginner, then set their lives to 1, and yours all the way. Then, keep playing until you can beat them with equal lives. Then, try to beat them with less lives then them, because in story mode, you will be required to fight with the odds agains you. (examples: fighting with half health, your opponent can heal, they are moving around and you cannot stop them, you have to fight 5 at one time, etc.) When you can do that, try it in vs. difficulty medium and hard, until your opponent is a piece of cake.

In the Roekel's Headquarters venue, you can heal health. Just stand in the middle circle when it starts glowing, and you will heal health. Do not let your opponent get in there, or they will try healing, and will try to kick you out.

In the Venom level (story mode) where you have to fight all of those enemies, there will be hovering green orbs. There are many enemies, and you will probably lose most of your health. However, if you are low on health, destroy one of the green orbs, and you will absorb their energy! You will aregain some of your health. There are about three or four of them througout the level.

Hit Apponent While You Are On The Ground

Here is a list of everyone and the things they can lift:

Easy Wins For Vs. Matches

If your opponent is someone who can do power blasts (examples: Spiderman/Venom's webs, Solara/Human Torch's fire blasts, Brigade/Van Roekel's power blasters, etc.), that is probably the first thing they will do to you. Especially in med./hard modes. Without you knowing, they will do power blasts every time you start. Even in the middle, if they start using their super power or start flying, they will probably do power blasts. You just have to keep R holded, and press R+Y (shield/reflect) whenever they shoot. This will hurt them a lot. With Roekel as an opponent, it usually gets him a ring out.

Number Of Versus Battles Needed

Here are the number of verus battles you need to fight to unlock the following items:

Every character has a special move. It is an automatic K.O. It works best if your opponent's health is in danger, and you have rage. Get rage, go next to the person, and press R+Y. This will either knock them down, or push them back. IMMEDIATELY, without hesitation, press R+X. It will rarely do a special move, but it's really cool when it does it. It shows off the character's powers.

You can unlock stages and characters very easily. for every 10 vs. matches, you get a player or a stage. Just choose Spiderman, plug in a second controller, and choose anyone. With Spiderman, just keep commiting suicide. You will quickly have all the characters and all of the stages.

Every sucsesful strike you do it adds to your rage meter. Once the rage meter is full press the r button and you will have unlimited superpowers for a breif amount of time.

This is a list of all the characters and groups:

When you are in the mansion level there will be suits of armor. If you press x near one you will grab a spear. The spear can be thrown or you can hit an enemy with it.

Enter HOWLETT as a code.

Go to the cheat menu and enter SAVAGELAND and you will unlock all Fantastic Four comics.

Go to the cheat menu and enter NZONE and you will unlock all Tomorrow People comics.

Enter THEHAND as a code.

We have no unlockables for Marvel Nemesis: Rise of the Imperfects yet. If you have any unlockables please submit them.

We have no easter eggs for Marvel Nemesis: Rise of the Imperfects yet. If you have any unlockables please submit them.

We have no glitches for Marvel Nemesis: Rise of the Imperfects yet. If you have any unlockables please submit them.

We have no guides or FAQs for Marvel Nemesis: Rise of the Imperfects yet. If you have any unlockables please submit them.

Submit a cheat for Marvel Nemesis: Rise of the Imperfects