Use the above links or scroll down see all to the Nintendo DS cheats we have available for Pokemon White Version. 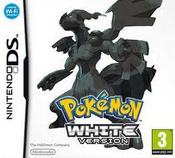 The Very Rare Sure Catch

I'm not sure if this is how to activate it, but all the times it worked for me, I pressed a+b+l+r until the ball opened, as soon as it opened, I'd press it one more time and when it glowed like it does when it closed id press it again. Then, I would here a noise and it would wiggle in mid air, hit the ground, wiggle once, and lock close. As said before, I'm not sure that's how to activate it, but it is helpfull and random. This is unconfirmed.

How To Get Celebi

Go to GAMESTOP. Ask the clerk. Some are available, but only while supplies last.

Get Pokemon from Johto, Kanto, Hoenn and Shinnoh

There is a way to get Pokemon like Ditto. First, you need to beat the Champion, Then you need to go to the Marvelous Bridge. While on the way, you will find in the bushes, Pokemon from the 4 regions.

Pokemon From Other Regions

After you beat the elite four and obtain the national pokedex, the two bridges to the right of the center of Unova open and every trainer you run across should at least have one or two pokemon from the other regions. Most of them should be pokemon from the Kanto region.

How To Trade Pokemon When They Know HM's

If you want to beat the elite four, I would suggest you start off to the right of the four rooms. Because on pokemon black and white, you can start the elite four from any member of it. After you beat the elite four, its champion time. But Lord N is now champion cuz he beats the previous champ, Alder, and challenges you to a battle, but before you start, your black stone will start glowing, and TA-DA! Zekrom appears. Use your hopefully saved Master Ball to catch him. If you don't have any space in your party, don't worry cuz after you catch him, a message pops up that asks you if you want to access your pc box. After this is when Lord N challenges you. The battle starts off when he uses his Reshiram; which makes you send out Zekrom. After that is the real battle. Once you beat N, its not over yet; Ghetsis pops up and faces you while you are still weak. After you win, its done, and N turns good.

First find a large patch of grass near a road. Then jump onto your bicycle and ride around on the road until a patch of grass starts to shake. Then proceed to run into the shaking grass there will usually be an Audino. Audino's tend to have simple beam, heal pulse, double edge, and after you so you only have to worry about double edge. When you defeat the audino you should gain large amounts of exp. Especially if its high leveled like the ones on route 16. If paired with a traded pokemon or even a lucky egg the exp. Gains could be enormous. Its not uncommon to gain a level per battle till level 50.

Cobalion is found in the Mistralton Cave first you need Surf to cross over there then Strength to push the boulders and Virizion is found in pinwheel forest after that old man leaves there are 4 rocks push them with strength.

There is a very easy way to catch pokemon in 5th gen. What you do is press "A" just before the pokeball is meant to shake. That will, in theory, cause the ball to shake. Trust me, I've done this myself and it works. I caught Zekrom using only three pokeballs.

Yes, Cynthia, from Diamond, Pearl, and Platinum, is in Pokemon Black and White. She lives in the town to the far right of the map. All her pokemon are on Lv. 75, and are very hard to kill. I havent beaten her yet but I will keep trying. Good luck to all of you who have beaten the elite four.

Getting The National Pokedex

To obtain the National pokedex, you need to beat the elite four. After you do the game will go through those long credits and start from the title screen. You will start off at home as usual. Then you will go outside somewhere and Professor Juniper will upgrade your pokedex.

Some good pokemon with the right moves most people should have on their team are a zoroark with the moves aerial ace, foul play, swagger (if it can learn it) and dig. IIf your wondering why I said swagger, you can raise the foes attack which boosts foul plays power (foul plays power is more powerful the higher attack the foe has) and the foe gets confused and it should hold a lum berry. Another good pokemon to have is a druddigon holding a rocky helmet (ability and item damage foe when they use a physical attack on druddigon) and it's moves should be dragon claw, double team, flamethrower and dragon tail. And for the zoroark, put a fighting type in the back of your party so the foe might use a phycic attack and since its a dark type, it wont be affected and the foe will probably think you are a hacker.

Differences Between Black And White Versions

Although there are some differences between white and black versions, much of the same hints and tips will work for both versions.

In case you all don't know there's a legendary hiding in the Giant Chasm. He's big, mean, and tough as nails. His name is Kyruem and he's level 75. He's also an ice type, so be prepped. Oh, and 1 more thing. Whoever that guy was that said it took him 3 ultra's to catch Zekrom, YOU ARE SUPPOSED TO CATCH HIM, FOOL! YOU DON'T NEED TO WASTE YOU'RE RESOURCES LIKE THAT!

Valcrona And First Evolved Form (and Darmanitan With Zen)

If you've beaten the game and return to the relic castle professor juniper should stop you before you go in. She'll talk about the statues and tell you there actually Pokemon! She'll give you a rage candy bar. Take it and walk up to a statue I suggest saving before you start because if you trained your Pokemon like I did than it will be hard to beat it with out it fainting. Any way you don't have to worry about it hitting you until you've cut its health in half. Because if I'm right its defense rises by half and it goes into zen mode were it looks like the statue. Once you've caught it (or beaten it in which you'll have to restart)go into the relic castle. Go down to the bottom of it (same way the first time you did it) and walk not to the middle but to the very right. There is a team plasma grunt inside you'll have to battle him to continue which isn't that hard. When you beat him you'll have to walk along a maze and you'll find another sage when looker takes him away walk inside the door due north. There should be a Pokemon standing at the end. This is valcrona. After you've caught him you'll notice that's not his first form so if your trying to complete the game your going to have to walk (or fly if you have common sense)back home. Go talk to mom and shell rest your Pokemon. Also go to the lab depending on how many Pokemon you've caught professor juniper will give you a TM. Now head to route 18. If you don't know where that is look it up when you get there there should be a house immediately there inside they will heal your Pokemon and give you an egg plus further along the route there should be a sage.

In dream yard, considering your starting pokemon you will receive either Pansear, Panpour, or Panseige, you then go to the big city with the docks you go to the first dock near the entrance and there will be a veteran and he'll give you a water stone, a fire stone, or a grass stone to evolve the pokemon you received from the girl in the dream yard.

First things first, catch a munna (best to have exp. share) in dream yard then level that munna to at least level 20. Then, at some point in the game, you will receive a moon stone. Use the moon stone and POOF! You have a strong musharna.

1. Cut:Found in the Dreamyard
2. Fly:Bianca gives it to you in Nimbasa City after battling the gym leader
3. Surf:Found in Driftveil City or Route 6
4. Strength:Haven't found it
5. Waterfall:Found in Route 18 one of the seven sages gives it to you
6. Dive:Found in Undella City a girl gives it to you outside right next to the Pokemon Center.

When you beat the pokemon league go to the dreamyard and somewhere you will find a musharna on level 50.

How To Find Rotom

I found Rotom on Route # 14 in a cabin. When I went inside, I saw a Professor who asked " By any chance have you caught a Ditto? " " If you did, would you trade it for my Rotom? " My little Brother got a ditto and traded it for a Rotom and it knew the moves, " substitute, charge, electroball, and hex. " Their Attack stat. is very low ( Bad ). He is level 60.

The hardest one would be hygrigon because he has moves that would faint your zekrom or reshiram. If you have a serperior prepare to faint because of falme blast or whatever it is called. And if you want his pokemon you need to get a deino on victory road then evolve it at lv. 50 I don't know what the name of the 2nd evolution is. Then evolve him at lv. 62 or 64. Then it would probably be a breeze to beat him.

Game ID: IRAO 0F0875FE
*NOTE: The Game ID for Pokemon White UK and US are the same. They also use the same cheats. Only Pokemon Black UK and US have different cheat inputs and Game ID.
*NOTE: Action Replay Firmware v1. 71+ (AR DS) or v1. 25+ (AR DSi) REQUIRED!
*NOTE: When checking off the cheat codes in your AR DS/DSi, un-check the Game ID box and Firmware box. They might be checked by default. If they stay checked, then your cheats will not work. They are just there for NOTE. Same goes for Pokemon Black US.

This is an Action Replay code:

We have no easter eggs for Pokemon White Version yet. If you have any unlockables please submit them.

When you're in the Day Car, you get EXP for each step you take. So you can get good EXP from it (but you will need a lot of cash). Do the following steps:
1. Drop off Pokemon at the Route 3 Day Care (you can drop off 2 pokemon).
2. Go to the Battle Subway in Nimbasa City.
3. Stand the character in the middle of the path, then place something heavy on your down and a buttons. If you can get it set up right, you can leave your DS alone for a while. 4. Come back and go back to the Day care and get your Pokemon. BOOM!