Use the above links or scroll down see all to the Xbox 360 cheats we have available for Saints Row: The Third. 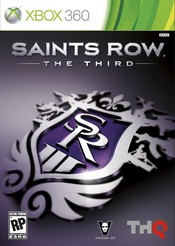 To customize any non-customizable vehicle, take any customizable vehicle into Rim Jobs, and press Y. Go to "Garage" in the menu, and highlight a vehicle that is not customizable from your list, but do not press the button to retrieve it. Instead, press B to back out of the menu, and can then select "Accept" to confirm the exit. It will now take you directly to the customizing menu and then there you go (note) you can not add kneecapers or rims it will mess up.

Tune to the indicated station to hear the corresponding songs.

When standing around waiting for my bank account to increase, I noticed about after an hour that professor Genki showed up. He was hitting pedestrians and "disturbing the peace", I decided to hit him with the Apoca-Fist (which is always one hit and they disintegrate). Not only did he take 5 hits to kill, but when I did he had approximately $350,000 dollars on him (I can't guarantee for sure how much he had on him but I went from $3,000 plus $96,000 from my bank to $450,000 with out doing anything else, I can't confirm that money was from him but I can confirm I did nothing else to earn it). This was done right next to the "Rim Jobs" in Yearwood (owned by the Luchadores) and i'm not sure whether it will work anywhere else.

You need the invincible pack (DLC) and satchel charges. Then get a jet ski. And throw the satchel charges behind you. Note: also you need type the vehicle no damage or else the jet ski will explode.

How To Change The Deckers Outfit

When you unlock the deckers outfit go to wardrobe and save it as an outfit type:TechPolice. First its green and when you put it on it purple.

When something bad happens, like when the cops or gang gets you down to the point where you are about to die, don't worry about it! Call up Shonda or one of your homies. If that doesn't work don't drive all over town because they will kill you. Go to one of your local or homes with your homies/ gang members, they kill while you chill then give it a minute. If they are still there, go in your garage or house and do something, then they will leave.

All Cheats In Saints Row The Third

We have no easter eggs for Saints Row: The Third yet. If you have any unlockables please submit them.

On the airpord at the black plane there is a truck. And behind the truck there are a silver telephone pole. Get in the truch and run it in to the telephone pole and jump out you will end up at the bottom of the map.

Submit a cheat for Saints Row: The Third