Use the above links or scroll down see all to the GameCube cheats we have available for Scooby Doo: Night of 100 Frights. 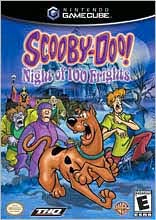 Set your GameCube clock to the following dates for something different in the game: March 17.

If you die after getting all the keys and having Shaggy up in the coffins, when you restart the level you can talk to an invisible Shaggy and still have him help you jump and walk around in his arms. You can take him all the way through the level to the doorway.

Red Beard will send out ghosts. Dodge them, then a ghost of Captain Moody will appear. He will throw his sword. Go to one of the ropes, stay until the knife cuts it, and keep repeating this attack.

Daphne will open coffins. When the Green Ghost hovers over an open coffin, superslam the switch.

Ram him, then super slam him.

Get The Football Helmet

To get the Football helmet go to the top of Haunted Hill.

How To Beat The Black Night

There is 4 switches when the Black Night is above one head smash it with square. It will shock him on every switch and he's doggone. (You must have the Football Helmet to do this)

Any time during gameplay,press start to pause, then quickly enter the following codes: Hold L+R, and press B(3), X(3), B, X, B.

Set the system date on your cube to one of the following days for holiday treats.

Set your gamecube for the following dates.

We have no easter eggs for Scooby Doo: Night of 100 Frights yet. If you have any unlockables please submit them.

We have no glitches for Scooby Doo: Night of 100 Frights yet. If you have any unlockables please submit them.

We have no guides or FAQs for Scooby Doo: Night of 100 Frights yet. If you have any unlockables please submit them.

Submit a cheat for Scooby Doo: Night of 100 Frights