Use the above links or scroll down see all to the Xbox 360 cheats we have available for Sid Meier's Civilization Revolution. 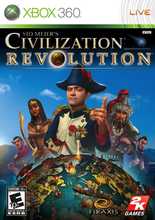 I came on this web site to find a cheat code for this game and knowing how you will check this I have to tell you that this web site sucks. The amount of advertisements I had to go through made me feel like a lab rat rather then a patron. So much so I went through a lot more crap just to make a profile, just to tell you that your web site SUCKS. Your site is the biggest sell out a lousy one at that.

If the Civilization has a road that it uses frequently to move troops and caravans, that could be a problem. To solve this problem, park your best defender class (i. E archers, Pike men, Riflemen, Modern Riflemen) On the road. This will slow them down bu one turn for most units, especially early on. Stack units on ether side of the Main defender unit to increase the time it takes to go around. Note: this only works during peace time, they will attack your units if at war. That is why you use your best defenders.

What you want to do is, keep about 3 or 4 archer armies in each city and then create legion or pike men to send throughout your cities. Even during war this is a great attack move. It can also be changed; same concept, different units; rifle men; cannons modern infantry; tanks/artilery etc. This works for almost all leaders and all units. Instant achievements!

I know it is tempting to just put a bunch of guys in your city, but they could just war of attrition you silly. Hit them first by putting your best defenders in the area out side your city. The enemy must now crawl through those unis giving you time to build more troopers.

To increase production, you firstly need to change the work from balanced to production in all your cities. Though if you are in the modern age, build an iron mine and/or factory and also adopt the communism government.

When you start creating three or more cities, place a few of them on the coast, or better yet, a single space peninsula. Go into the settings for that city, and switch all production to science. As soon as you can build a library, put it in the coastal cities, they double the amount of science you learn, and allow you to research technologies that much more quickly

When fighting a long battle with an enemy in his home turf, don't forget to leave a few archers defending the city closest to your enemies. There's nothing worse than trying to win, when one of you cities is automatically captured because you pulled out all the stops.

We have no cheats or codes for Sid Meier's Civilization Revolution yet. If you have any unlockables please submit them.

We have no unlockables for Sid Meier's Civilization Revolution yet. If you have any unlockables please submit them.

We have no easter eggs for Sid Meier's Civilization Revolution yet. If you have any unlockables please submit them.

We have no glitches for Sid Meier's Civilization Revolution yet. If you have any unlockables please submit them.

We have no guides or FAQs for Sid Meier's Civilization Revolution yet. If you have any unlockables please submit them.