Use the above links or scroll down see all to the Xbox 360 cheats we have available for Skate. 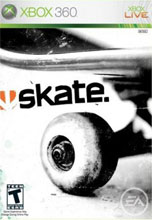 To win any game of "skate", all you have to do, is do any trick as a 540, then the opponent will not even try it, he/she will do a completely different trick or just bail. Works every time!

Near the skate park you start in on skate, there's a small skate spot with benches, tables etc. On the bench that's on the hill dip part, go past that then turn around don't get to much speed and do a grab over the bench and it should give you a small speed boost.

In the skate pro challenge (in blue) do a trick with a spin and tweak it the direction you spin and you got a 540!

In races, you would most likely come across a straight away when you need to pick up speed. The easiest way to do this is to double grab, RT+LT then hit B and you will do a coffin. This makes you pick up more speed faster. Careful though, while in coffin you have bad steering.

How To Push Faster In Races.

When starting a race everyone else shoots ahead of you. But if you pull one of your grab triggers in slightly and push at the same time, it cuts wind resistance on you and gives you a bit of an edge. This will not always give you a hole shot but in all pushing while crouched does help out a lot. I won a lot more of my races this way.

The best place to break bones in this game is at the X-Games. Just go to the Mega Ramp and jump off the top to the ground below. Press LT/RT + B to do a Christ-Air/No-Foot Air. When you "land" you should break a good amount of bones. NOTE: Do flips and bail early for even more broken bones.

During Rob & Big's pro challenge you have to perform a 360 Flip and land on the bench in a FS Crooked. This can be very difficult as Big Black often gets in your way and you have a higher chance of landing in an Overcrooks. To make things easier, jump onto the bench and set a respawn point. Now, do the 360 Flip and push the right stick up-right. If done correctly you will land in an FS Crooked. If you land in a BS Crooked then switch sides. It may take some practice.

You only need 3 good pushes on flat land to get yourself to top speed. Very useful in places where you have little room.

When your grinding, move the right analog stick slowly in any direction, this performs different grinds out of the one you were doing. Also try and flip trick out. It helps a lot.

Mostly you just need to flick harder with the analog stick. If you go to do a varial kickflip or heelflip [varial] then just flick harder at the end to make it do a 360 flip. Same with Hardflips and Inward Heelflips.

To unlock all skaters go to the main menu and press LB, LT, RB, RT, Down, Down, X, Y. If you enter it correctly, a message will popup.

Break each bone in your body at least 3 times.

On Your Way... Achivement

Complete all the tutorials in Career Mode.

Complete all the tutorials in Career Mode.

Save a Replay in Career Mode.

Beat all the Pros.

Get the cover of The Skateboard Mag.

Skater Of The Year Achivement

Get the cover of Thrasher Magazine.

Earn Gold in both X-Games events.

Own all the Spots.

Complete 50% of all Milestones.

Performed all Tricks in the Trick Book in Career Mode.

Keys To The City Achivement

Complete a Shop Film to become an Amateur.

Earn a Pro Model Board.

Without Footage It's Fiction Achivement

King Of The Highway Achivement

To unlock the skater Dem Bonez, you have to break about 150 bones give or take.

We have no easter eggs for Skate yet. If you have any unlockables please submit them.

We have no glitches for Skate yet. If you have any unlockables please submit them.

We have no guides or FAQs for Skate yet. If you have any unlockables please submit them.

We have no achievements or trophies for Skate yet. If you have any unlockables please submit them.

Submit a cheat for Skate