Use the above links or scroll down see all to the PlayStation 2 cheats we have available for Smackdown vs. Raw 2011. 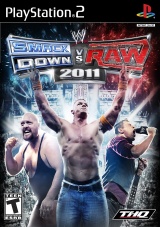 In Rey's road to wrestlemania you start off as evil but when Evan Bourne shows you the the vido that you saw earlier in the storyline then yu pick Swagger's side or Bourne's side.

I know what you're thinking hey this is fake there's no time machine in wwe, but just read this. In christian's road to wrestlemania during the elimination chamber ppv go to the bottom locker room and talk to Edge. You guys will start talking about a time machine and plan to rebuild it. After that goes to the gm office and talk to Mr. McMahon. After that you'll notice to action figures next to the tv in the gm's office, pick them up. Next go to the green room and pick up the flux capacitor. And then go to the parking lot and pick up the phone booth. After you pick up all 3 pieces go to edge in the locker room and rebuild the time machine. After that you can go to any of those already done in everyone's road to wrestlemania. Enjoy!

When the match starts stay close to the ref, When Undertaker trys to hit you he will hit the ref if you keep doing that Undertaker will keep hitting the ref and will be disqaulified.

In Christian's road to wrestlemania you start in ECW. Then you'll lose in the royal rumble and go to smackdown, Theadore long makes you target the tag team champions. So you team with Edge and after you win the ladder match at elimination chamber you could cash it in against Edge (World heavyweight champion) or Shawn Michaels (WWE champion).

Rey Mysterio - is one of the most popular Superstars in the WWE, but if you take SmackDown vs. Raw 2011 competition seriously, you can’t simply pick your favorite Superstar and expect to win right out of the gate. Not all Superstars are created equally, and unless you’re an expert like myself, it will take some time to master each Superstar.
While Mysterio is one of the better Superstars in the SvR 2011, he’s also very technical and requires a decent knowledge of the game if you wish to defeat skilled opponents. Mysterio has speed and agility on his side, but you’ll need more than that to take down a top player.
First and foremost, you can’t play Mysterio like his real-life WWE counterpart and expect to beat skilled players. Flying off the ropes and turnbuckle will only make it easier for an opponent to use a reversal. Instead, focus on Mysterio’s reversals, speed and abilities to win matches.
Reversals are the true key to winning, thanks in part to a Technical rating of 95, and Mysertio’s Leverage Pin ability. Add to that a Speed rating of 85, and you should get in close to an opponent and reverse as many attacks as you can, then if you get into trouble, use Mysterio’s speed to quickly move away. Once an opponent has been heavily damaged, a reversal into a leverage pin is enough to win the match.

Sheamus - may be new to the SmackDown vs. RAW series, but you wouldn’t know it by looking at his attribute ratings. He’s a heavy-hitter, with Grapple and Strikes ratings of 90, and a Submission rating of 80. This means you can use any variety of attacks you wish and Sheamus will inflict significant amounts of damage. Almost all of Sheamus’ attribute ratings are above average, so you can reverse attacks easier, and take more hits than most other WWE Superstars. In fact, if you think you’re as good at the game as I am, just walk up to your opponent and let them hit you a few times. Sheamus has a Durability rating of 90 and the Resiliency ability, so he can certainly take a pounding. However, this is only recommended if you’re a master of the squared circle, like myself Unfortunately, Sheamus Charisma rating is only 70, but when you have a reputation like he does, taunting is nothing more than a nail in the coffin of your opponent’s ego. While you’re busy gloating, don’t forget to turn up the heat with Sheamus’ Fired Up ability to execute three consecutive Finishers and end the match in style.

How To Defend Any Wwe Title

To defend any wwe title! first go to superstar management then go to any superstar (except a diva. ) and give them the ecw or wcw or hardcore championship and give them any other title (except the divas or womans championship. ) the go to a match and press advance then title and it will show the two titles that superstar has.

Go to the "Cheat Codes" section and enter: SLURPEE

Hey everybody you want classic belts like the million dollar championship, cruiser weight, and hardcore championships right? Well the other guy or girl told you the wrong answer it's actually not caps lock it's lower case so it's actually: historicalbelts.

Tribute To The Troops Arena

Go to cheat codes and type in 8thannualtribute.

Go to the "Cheat Codes" section and enter: SLURPEE it should be capital.

We have no easter eggs for Smackdown vs. Raw 2011 yet. If you have any unlockables please submit them.

We have no glitches for Smackdown vs. Raw 2011 yet. If you have any unlockables please submit them.

We have no guides or FAQs for Smackdown vs. Raw 2011 yet. If you have any unlockables please submit them.

Submit a cheat for Smackdown vs. Raw 2011