Use the above links or scroll down see all to the Xbox 360 cheats we have available for Sonic Unleashed. 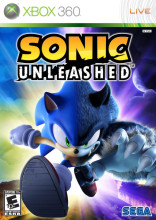 Go somewhere that is dark while the sun is out for a minute or longer to be Shadow The Hedgehog!

Sonic the Werehog has a move called "Sho-Hog-Ken" a uppercut. Its actually a reference to Street Fighters Shoryuken.

Restart the level just before touching the level goal. Timing has to be perfect or it won't work.

When your in a village or town hub use the homing attack and press the B button, LT trigger and hold the left stick either right or left at the same time when your about to touch the ground to start drifting. When you think you drifted an enough amount of time and use the homing attack you'll boost instead. It also works if you stomp on a ramp or stairs and hold the left stick left or right and the LT trigger at the same time in the exact second you touch the ground.

When you enter spagonia go to the ally on the right and see two lights on seperate sides of a door, stay a few steps back and you hear the guy whistling.

Once you've gotten the Missile Punch skill and Combat level MAX, go back to Dark Gaia Pheonix. Try and get an early start and throw water at it right before the first attack! Once it lands on a platform, throw Missile Punch at it, and the first 2 stages of it's health will completely go down, plus a little extra! Once it's time to press all of the buttons, the Dark Gaia Pheonix will be DESTROYED!

After the cinematics, you will play as the Gaia Colossus dashing through Dark Gaia with the correct button. Dodge or smash the rocks to reach Dark Gaia and get closer. He will shoot a laser after awhile. When he is about to shoot, guard and move to a side to dodge it. You will get hit at least two times. You will then go into a "quick thinking" phase were you have to press the correct buttons. If done correctly, Dark Gaia will get a hold of you and you will play as Sonic. As you go through the Colossus, you will have to press the correct buttons to hit Dark Gaia's big eyes. You will have to repeat this all two more times, then stage gets harder. After you are done, you will enter the Super Sonic stage, where you will start to fly towards Perfect Dark Gaia. When you get near the Force Shield, Chip will enter the shield in the Colossus. You will then have to hit the snakes outside of the shield as their heads leave it. As you hit the snakes, Dark Gaia will attack. Avoid the rocks and lasers he shoots. After you knock out all the snakes, the shield will drop. Then Dark Gaia will grab the Gaia Colossus. You will now have to press the correct buttons to save him using Super Sonic. After you free the Gaia Colossus, Dark Gaia will shoot a laser at it. You will have to press a particular button a certain number of times to block it. If done correctly, Super Sonic will fly towards Dark Gaia's middle eye. You can use [Boost] while flying there if desired. When it is over, your grade will be based on how fast you did it.

When you get EXP don't waste it on Strength. youll see the Mazuri level that is really hard, so upgrade your life first.

Ultamant Speed For Sonic The Hedgehog

At the start screen press a,x,y,b,rb,lb,lt,rt.

Defeat the final Boss and successfully complete the game.

We have no easter eggs for Sonic Unleashed yet. If you have any unlockables please submit them.

We have no glitches for Sonic Unleashed yet. If you have any unlockables please submit them.

We have no guides or FAQs for Sonic Unleashed yet. If you have any unlockables please submit them.

We have no achievements or trophies for Sonic Unleashed yet. If you have any unlockables please submit them.

Submit a cheat for Sonic Unleashed