Use the above links or scroll down see all to the PlayStation 3 cheats we have available for Stranglehold. 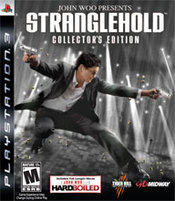 Hard Boiled mode
Successfully complete the game on the Casual difficulty setting to unlock the Hard Boiled difficulty setting.
Secret Theater
In the first level, after the second checkpoint when you are walking in the door, take a right. You will see a damaged door. Shoot it, then walk through the corridors. You will end up at a secret theater that shows two previews of games, The Wheelman and Blacksite: Area 51. There is also a golden pistol, a paper crane, and a shotgun in the theater. Extra ammunition
If you run out ammunition but have enough Tequila Bomb for Precision Aim, aim at someone and shoot. This will create 20 to 30 more rounds for the handgun. Always try to have a enough Tequila Bomb for Precision Aim in the event you run out of ammunition. Defeating Wong and DaPang
Use the following trick to defeat Wong and Dapang on the Hard and Hard Boiled difficulty setting. As soon as the checkpoint occurs (DaPang jumps down to you), run straight ahead and shoot the bottom right of the dragon statue. Almost always the statue will fall, killing DaPang instantly. You have to be quick at this stage, especially on the higher difficulties. As soon as DaPang is dead, you will have a few seconds to pick up the two Paper Cranes which fell after you destroyed the statue. Then, at least five or six men will appear and run directly at you. Dodge them the best you can, and make your way to the golden guns to the left of the statue podium. Trade in your weaker guns. You will now have 32 golden bullets. You will most likely have a shotgun. If you do not, grab one. Make your way to the far left or right. Take cover behind a pillar and wait for the remaining enemies to come after you. When they get within a few feet of you, enable Tequila Time to kill them with one shot. Usually there is one remaining enemy that shoots at you from a distance. Ignore him. If you kill him, more enemies will appear. By now you should have or almost have a Barrage Bomb. Run upstairs and pick up a health pack if needed. As soon as you reach the top, Wong will start shooting, so you must be quick. Enable Precision Aim; it is much stronger now that you have golden guns. Wong is weak against Precision Aim. Make sure you hit his head for maximum damage. While he is stunned, grab the Paper Cranes to the far left and right. Wong recovers quickly. Use Precision Aim every time you get a paper crane. There are two more Paper Cranes on the chandeliers. Swing on them to get them, but only do so after successfully hitting Wong. After you have hit Wong as much as you can with Precision Aim, he will still be alive, but have very little life left. Enable Tequila Time, and fire your golden guns. He should die in seconds. If you are skilled at throwing grenades, use them. However, they are slow and will leave you vulnerable.

We have no cheats or codes for Stranglehold yet. If you have any unlockables please submit them.

We have no unlockables for Stranglehold yet. If you have any unlockables please submit them.

We have no easter eggs for Stranglehold yet. If you have any unlockables please submit them.

We have no glitches for Stranglehold yet. If you have any unlockables please submit them.

We have no guides or FAQs for Stranglehold yet. If you have any unlockables please submit them.

We have no achievements or trophies for Stranglehold yet. If you have any unlockables please submit them.

Submit a cheat for Stranglehold