Use the above links or scroll down see all to the GameCube cheats we have available for Tales of Symphonia. 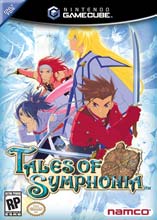 If you find yourself trapped in a large area enemy attack and are controlling Lloyd, use any tempest or rising falcon to quickly move out of the way. Rising falcon is also an easy way to get behind the enemy.

There are 3 super hard mini bosses in this game called sword dancers. The first one in after you fight Sheena in Ossa trail. The second one is somewhere in Gaorrachaai forest and the last one is in Iselai forsest. They are all extremely hard but beatable. If you have the 10x exp upgrade this is super easy but if not, watch out.

First have Genis use Indignation 50 times then use it when he is in overlimit you should hear him say Indignant Judgement.

Use Judgement and Holy Song 50 times (learning this skill is random, keep using the required techs until she learns it.)

After the event of the ring of the pact with Origin return to Heimdall and speak with the old man behind the two stores across the right bridge you'll view an event that will teach Genis, Meteor Storm.

When using the Unison Attack make sure you use Ray + either Cyclone, Explosion, Ground Dasher, or Tidal Wave. (this combination will drag out Prism Stars making a total of 30 hits.)

When you first go to the tower of salvation in sylverant, make sure you are at least at level 30. Have 20 of each gels and revive bottles. Have Genis and Raine in your party and beat Kratos with all you got.

After clearing the game and playing through the second game, go to Kats Village and talk to the village elder. You can then view all the skits you viewed in the first game plus many more.

If you go to zelos house the butler will tell ya that the king want's to meet you, go to see him and he will tell you that the pope kidnapted the princes. Go to the tethealla bridge and you will see a short movie and then go to the forest where you meet Regal and fight three soldiers, rescue the princes, you will see another movie and then go to tha palace. Finally go to the giant house before zelos house there will be a celebration and you will find some other clothes.

If you defeat the single party advanced class with any character, you only get Gald. But, you must open the giant door at Vinheim castle and go in. After that, go back to the meltokio colisseum and defeat the single party advanced class again with any character. Besides Gald, they will get receive a title and a colisseum weapon (e.g. Lloyd receives the title, "Sword of swords and will receive the Valkyrie Saber). These weapons are very powerful.

Near the end of the game, you most likely will get Zelos back on your side because he was just pretending to be on Mithos' side. But, there is also a different way. Through-out the game be as nice to Kratos as possible, and when you have the choice to talk to everone (like right after the fire seal on the beach) only talk to Kratos. This causes a different ending. Instead of getting Zelos back, he wasn't pretending and you kill him. Instead you get Kratos back (and he's MUCH better then Zelos)

To obtain the title "Dream Traveler" for Presea, you must first go to Altamira located in Tethe'alla. When you get there, go to the Lezareno Company. Then, go to the President's Office and talk to the president (the guy with white hair and a white beard). He will say that they need a new mascot for the resort, and Presea is chosen. When you finish doing all of this, Presea will obtain the title "Dream Traveler", which is a costume that resembles what she wears when she's the mascot. (NOTE: You can only accomplish this if you have beaten the game, but have not started over on the same file).

To obtain the title "Masked Swordsman" for Zelos, you must first go to Meltokio. Then, head for Zelos' mansion. When you get there, the girls that like him will arrive. They will be talking garbage and so will Zelos! After that, Zelos says that he should hide his identity so he's not bothered. After saying this, Zelos will obtain the title "Masked Swordsman", which is just a costume that shows what he wore when you were going to enter the coliseum for the first time, that is, if you chose to fight as him. (NOTE: You can only accomplish this if you have beaten the game, but have not started over on the same file).

To get the title "Maiden" for Raine, first go to Asgard located in Sylvarant. When you go to the place where the fake wind seal monster was located, you will see Aisha (the girl who said was going to be sacrificed) walking down. She will ask you if Raine can go do the special dance again that she performed before. When she does it, you will see a part where all the boys are falling in love with her, including Zelos! After that is done, Maiden will obtain the title "Maiden", which is just a costume that resembles what she wore when she was doing the special dance. (NOTE: You can only accomplish this if you have beaten the game, but have not started over on the same file).

God Of The Kitchen

To get the title "God of the Kitchen" for Regal, you must first go to Meltokio. Go near the king's castle, and then you'll see the Wonder Chef (if you've ever met him) and another chef talking to each other. Then, the other chef challenges you to a cooking challenge, and you automatically learn how to make Beef Stew. You will end up winning no matter what. When you win, the Wonder Chef will be waiting for you at the entrance of Meltokio. After talking with him, you will obtain the title "God of the Kitchen". When you choose Regal as you're running person, you'll notice that he's wearing a chef costume. By the way, to make Beef STew, you need 3 simple ingredients: any type of meat, onion, and purple satay. (To get this title, you must first beat the game, but when you do, do not start a new file over the one you just finished).

To fight Seles, you must first have a green star on your file. In other words, say you were going to load you game. Well, the box that tells you how much time you've played for has to have a green star. Then, go to the coliseum in Meltokio. Go talk to the lady in front of the counter and enter the Advanced Class once you beat the Intermediate Class. After you have beaten the Advanced Class at least once, then go enter it again. When you beat the Dragon Knight, which is the last monster in the Advanced Class, then Seles will appear after you've been awarded. Watch out when fighting her, because she is like another Zelos. (TIP: Some of the moves she uses are: Ray, Absolute, and Mini Meteor)

When you get to the wind god, There is 5 fan things. you will have to figure out the pattern. It goes Reg, green, white, yello, blue. The door should open when you spin the fans with the Sorceror Ring.

Maxwell is an optional summon spirit. To get him, you need the Derris Emblem from Welgaia. After that, go to Exire, the city in the sky. Cross the bridge that is near the three story building. When you reach the next screen, go to the house near you, BUT DO NOT ENTER. Instead, go up to the door and go around the house. You'll be taken to the back. Cross the long bridge until you reach a slab. Equip each of your party members with garnet, aquamarine, opal and ruby(each of them must have one gem). Read the slab and you will fight Maxwell. Defeat him and you will have the ability to summon him.

To fight the bonus boss, Abyssion, collect all 9 Darkness weapons. Go to the Shadow Temple and fight Abyssion for the right to use the weapons.

In order to receive the Dynast, Regal's ultimate weapon, train him until level 80. Then, go to the Meltokio prison. Speak to the prisoner, then speak to Regal's mentor at the Hot Springs. If Regal is at level 80, his mentor will give him the Dynast.

When fighting the mutated version of Marble, stand back and use Demon Fang. Then, when your TP goes low, move in with a flurry of TP attacks and normal attacks. When your health or Genis's health is low, use an apple gel. If he died, then use a life bottle. If you died, the continusely heal Genis. If you didn't die, then unleash all your might on Exebudia.

Once you've unlocked the first four seals, you will go to the tower of salvation. Before you do, take off all items that you have on Kratos, then go. Once you're there, fight Remial normally, but when you get to Kratos, don't use items because you must lose this fight. Then you will fight Yggdrasial with 1 H.P. each. Don't even bother because you'll be lucky if you can even survive the first attack, which can do up to three thousand or more damage even if you have done Gardian.

When fighting the fire seal boss, take out the two smaller ones first. Then attack the big one with just press A twice to spin, or use sword rain. When he lowers his head jump and you'll clear the spikes he shoots. Repeat about 10-20 times and he's dead.

After you beat the game, start over and restart your game and you will unlock the grade store. You can buy items with your grade points.

We have no cheats or codes for Tales of Symphonia yet. If you have any unlockables please submit them.

We have no unlockables for Tales of Symphonia yet. If you have any unlockables please submit them.

We have no easter eggs for Tales of Symphonia yet. If you have any unlockables please submit them.

We have no glitches for Tales of Symphonia yet. If you have any unlockables please submit them.

The BEST Walkthrough for Tales Of Symphonia

Submit a cheat for Tales of Symphonia