Use the above links or scroll down see all to the PlayStation 3 cheats we have available for Tekken 6. 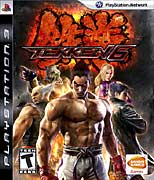 To do an awesome move for Lars, press triangle and square together and hold the top left arrow keys together.

If you can't beat Azazel then here is way to do so. First you have to select either Eddy or Christie and fight until you get to Azazel then as soon as the match starts try to get close to him then press X and directional button towards then keep pressing O. If you get knock down get back up and do it again. If you get beatin don't worry it will take you to the character selection screen pick the character and you'll go back to fighting Azazel. When begin Arcade mode offline you can pick any character to fight with but when you get to Azazel lose on purpose so you can choose Eddy or Christie. (Only if you want to).

In ghost or arcade mode press square or triangle on any character to see its first or second costume (square costume 1 x costume 2 triangle costume 3).

Right before the "win sequence" movie plays at the end of a fight, hold: Left-puch, Right-punch, left-kick or right-kick - then you can select your win pose. Some of the characters have different numbers of poses that you can select.

Comic Effect in English and Japanese

Beat the final level of Scenario mode to unlock the comic effect!

We have no easter eggs for Tekken 6 yet. If you have any unlockables please submit them.

We have no glitches for Tekken 6 yet. If you have any unlockables please submit them.

We have no guides or FAQs for Tekken 6 yet. If you have any unlockables please submit them.

We have no achievements or trophies for Tekken 6 yet. If you have any unlockables please submit them.

Submit a cheat for Tekken 6