Use the above links or scroll down see all to the PlayStation 3 cheats we have available for The Elder Scrolls IV: Oblivion: Game of the Year Edition. 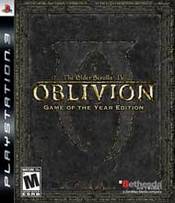 Go to the imperial city taols plaza district and find dorians house. Once there, kill him and search his body and take money it shouldn't run out enjoy.

Want A Silverlong Sword At Level 1?

To the north west of cheydinhall there is a fort faragut (name may be off a little). Its close to the city. At the entrance of the fort,. On the left side of the fort is a huge tree, it has a hatch inside it. The hatch is a hard lock. Inside is a barrel that is locked, inside the barrel is poisen apples. Go to a gaurd tower and watch where the get there food. Take all the food and replace it with the apples. When they die you can loot them with no trouble. Bow, sword, armour, arrow. Have fun.

Have you ever Stolen an item and been caught? When you do either pay gold or go to jail and serve your time. After the loading is done turn around and go back to where the jailer is sitting at a table you can either sneak/stealth into the room and look for a treasure chest and when you look at the chest with the curser in the middle of the screen, the chest should have the name evidence. The chest is locked with the lock pick level of “very easy” and when you open it up there is all of the items that you stole just steal them back, but if you have to use the lock pick the guard will see you and you will have to go to jail again but all of the items you took back will be put back into the evidence. To get the items back just repeat but this time you don’t have to use a lock pick. Have Fun Stealing.

Have you ever wanted to use stolen armor or weapons but you got arrested when you did? Well if you want to use the armor and/or weapon you stole just gain enterance to the theives guild than sell the armor and/or weapon to a fence and then buy it back from them (if you don't know what a fence is it's a person you can sell your stolen goods to in the theives guild. You can also buy stuff from them. ).

First set the game to it's easiest difficulty. Then you have to beat the arena in the Imperial City. After you beat the arena (meaning after beating that grey ogre guy)go down to the bloodworks and there should be an archer shooting his arrows into one of those archer training targets. He shoots into that archer target thing most of the day and he never runs out of arrows. So you could stand there and wait for him to take a couple shots into the target, then collect the arrows he shot into the target all day! (He shoots iron arrows and it took me about 5 min to get 100 arrows. Just to give you an idea on how fast the process goes. ).

Faster Way To Get 100 Heavy/Light Armor

Remember the first Anvil fighters guild quest? "a Rat Problem" well go to the lady's house that has the rat problem, go to her basement, then PUNCH each rat 1time and be sure NOT to kill them. When all 4 are attacking you your heavy/light armor level will sky-rocket!

1: go to arena
2: become contestant
3: set difficulty to the easiest possible
4: go to your battle
5: DO NOT FIGHT BACK!
6: let the enemy attack you
7: after a while your armor skill will increase
8: use a potion if your health gets low
9: after a while you will get a little icon beside your compass
10: kill the enemy
11: go to sleep and you leveled up =)

1 finish the the first part of the game[prison part]
2 look on an oblivion map
3 look up the road to chadinhal you will see a hook coming of the road go to the hook on the map
4 if its called barren cave your at the right bit
5 enter
6 there will be many vampires inside get it by one
7 wait until there's a word at the top of your screen saying you have contracted [ I forgot what the word was it starts with a p]
8 sleep for 3 nights
9 when you wake up it will show you this paragraph
10 you are a vampire [stay out of the sunlight! ]

1 find a paralysis potion or a spell
2 go to the imperial city
3 go in the talos plaza district
4 find a house called dorins house
5 go in
6 if you have the potion you have to use it on your weapon
7 if you have the spell get it ready
8 find dorin
9 paralize him
10 pickpocket him before he wakes
11 steal his money you will see it wont run out ever
12 enjoy!

You need two or more scrolls and they must be the same. First you click on the scrolls twice. Then you drop the item that you you want to duplicated.

Get two magic scrolls (of the same exact type), double tap X on the scrolls in your inventory, then drop the item you wish to be duplicated. (Note): You can only drop 1 of the items you wish to be duplicated and some items cannot be duplicated, like a curiass. Also if you have say 20 of the same type of scroll then you can get 20 of the desired item. (Note) Some items, depending on how many you duplicate, will make your game lag worse than others. *Curse the lockpick*.

We have no cheats or codes for The Elder Scrolls IV: Oblivion: Game of the Year Edition yet. If you have any unlockables please submit them.

We have no unlockables for The Elder Scrolls IV: Oblivion: Game of the Year Edition yet. If you have any unlockables please submit them.

We have no easter eggs for The Elder Scrolls IV: Oblivion: Game of the Year Edition yet. If you have any unlockables please submit them.

Walk into a random home kill the people in it try to find a door that opens without loading to go in a different area. Go into your magicka spells and select a destruction spell I would use fire ball. Anyways shoot the body halfway into the doorway with the spell the close the door. Their body will get stuck together and jolt really fast after that happens sit back and watch the seizures of joy.

We have no guides or FAQs for The Elder Scrolls IV: Oblivion: Game of the Year Edition yet. If you have any unlockables please submit them.

We have no achievements or trophies for The Elder Scrolls IV: Oblivion: Game of the Year Edition yet. If you have any unlockables please submit them.

Submit a cheat for The Elder Scrolls IV: Oblivion: Game of the Year Edition