The Godfather: The Don's Edition cheats & more for PlayStation 3 (PS3)

Get the latest The Godfather: The Don's Edition cheats, codes, unlockables, hints, Easter eggs, glitches, tips, tricks, hacks, downloads, trophies, guides, FAQs, walkthroughs, and more for PlayStation 3 (PS3). CheatCodes.com has all you need to win every game you play!

Use the above links or scroll down see all to the PlayStation 3 cheats we have available for The Godfather: The Don's Edition. 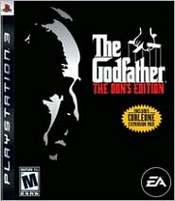 After you beat up the men and are told to locate your safehouse, follow the Don's enforcer out of the alley and turn left. Walk down a short distance to the next alley on your left. There will be a thug standing there, staring at you. He will not attack, but if you beat him up he will drop a pistol, which is good for a first gun. You can use the pistol to get through the next few missions easier (before you are given a more powerful gun by the mob).

Enter a hotel, nightclub, shop, etc. that you own. Smash the cash register and collect the money. Walk out the door, then walk back in. The cash register should be fixed. You can repeat the process as many times as desired. It is a slow way of getting money, but sometimes you will get $10,000.

While driving, honk your horn constantly by pressing L3 to send other cars to the side of the road. Additionally, go to a police station and bribe the police chief. You can then steal the police car without any trouble. Press L3 to turn on the siren. Cars will now move out of your way.

"The Don Is Dead" Mission

Before starting this mission, break the windows in the barber shop. This will allow for easy shooting once the Don is shot. The recommended gun for this and any other close range shooting mission is the magnum.

Get Past Barricades Easily

You must blow up all safes to become Don Of New York City. Blow up all the safes when you are taking over businesses that have one. By doing this you will not have to search for safes after you completed most of the missions. Also, you will get an money, 1,000 Respect, and dynamite by blowing them up.

All the safe houses that you pay for have ammo caches. When low on ammunition or health, you can go into these houses and restock. They are the orange houses on the map, and most are in hotels.

When you are getting shot by another family or cop, grab someone nearby and use them as a shield. By doing this, you will not get hurt while being shot.

When you are locked onto an enemy who is hiding behind a crate or low object, keep locking on but use the Right Analog-stick to move the crosshair to a part of their body that is sometimes sticking out, like their head or arm. This will help you kill them easier.

If you commit a lot of damage and/or kill a lot of people, you will get wanted stars. Once you get enough stars, the police will chase and shoot you. To lose them, just move to a different area and all of your stars will immediately go away.

In missions where you have to kill an important figure in a certain way (such as pushing them off a roof or into a furnace), you can do this easier by luring the enemy over to the hazard you must use to kill them before fighting with them. Just avoid them and run over to the hazard. They will come over to you. Beat them up a little, but do not kill them completely. Then, grab them by holding L1 + R1, and swing them so they have their back to the hazard. Then, push forward with the Analog-sticks to shove them to their death.

When you are being chased by enemies in a car, let them drive up on your side. Usually they will come up near your rear on your left or right. Then, look ahead and lure them into an accident. Usually they will smash into something like oncoming traffic or a wall if timed correctly. They will eventually come back and catch up to you, but if you keep doing this they will eventually blow themselves up (because you cannot shoot out your car at them).

Hidden Money In "Death To The Traitor" Mission

After placing the bomb in the upstairs of the bar, an enemy will suddenly open up the previously locked door at the top of the stairs. Quickly run into the hallway to find a massive stash of money bags. Do this quickly by sprinting, as you will not have much time to run downstairs and leave before the bomb explodes. Do not bother trying to open the second door in the hallway, because it is locked.

Pause the game and press Left, Square, Right, Triangle, Right, L3. There is a five minute lockout before this code can be re-enabled. To bypass this, save the game after the code has been enabled, quit the game, then reload your saved game.

Pause the game and press Square, Triangle, Square(2), Triangle, L3. There is a five minute lockout before this code can be re-enabled. To bypass this, save the game after the code has been enabled, quit the game, then reload your saved game.

Pause the game and press Triangle, Left, Triangle, Right, Square, R3. There is a five minute lockout before this code can be re-enabled. To bypass this, save the game after the code has been enabled, quit the game, then reload your saved game.

Reach the "Don Of New York City" rank at a 91.5% game completion to get one million dollars and unlimited ammunition for all of your guns only. Bombs, dynamite, and Molotov Cocktails are not unlimited, and melee weapons can still wear out. To become the Don, you must take over all businesses and rackets, then complete the contracts on the other families top Bosses.

No Heat When Stealing Cars

Reach the "Underboss" rank to have no heat when stealing a parked car.

We have no easter eggs for The Godfather: The Don's Edition yet. If you have any unlockables please submit them.

We have no glitches for The Godfather: The Don's Edition yet. If you have any unlockables please submit them.

We have no guides or FAQs for The Godfather: The Don's Edition yet. If you have any unlockables please submit them.

We have no achievements or trophies for The Godfather: The Don's Edition yet. If you have any unlockables please submit them.

Submit a cheat for The Godfather: The Don's Edition