Use the above links or scroll down see all to the Xbox 360 cheats we have available for Tony Hawk's American Wasteland. 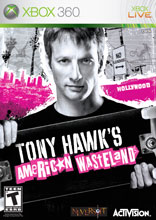 Put it on easy or and put in 2them00n under cheats to get moon gravity then go to high score free skate and turn high score on and get major air, trick out, and then you'll get an achievement for whatever location you choose, Beverly hills, oil rig, Hollywood.

Go to the barber and get a brown afro and the gottee/mustache combo. Then, get tight pants and the Hawk Thunder shirt. After that, get your black boots and your dark (but not too dark) aviator glasses.

When going up a quarterpipe, instead of olling at the top, ollie more towards the bottom. Your skater should land at the top. Then, ollie again very quickly and you should get a lot more air. It is possible to get enough to do a 1080.

At the bowl on the roof near the skate shop, get on the second rail going towards the skate shop wall and sticker slap. Jump on the third (and top) rail then jump off towards the wall you are going towards. Dismount and you will be in an apartment. If you look near the bed in story mode, there is a construction worker trying to levitate a goat. Enable the "Moon gravity" cheat and go to Hollywood. Go to the pool behind the billboard above the skate shop near the bus. If you go high enough on the corner of the pool opposite to the one facing the bus, there will be a ledge you can land on. There will be a crack on the wall. Walk into that wall, and you will enter a hotel room with a construction worker facing a goat on a bed.

The Roller Coaster and Ferris Wheel are from Fat Albert; even knowing they say that they are from Philadelphia.

When you meet Master Zen for the second time, your character will make a comment saying "Is this a wax on, wax on thing?"

Andrew Reynolds, Tony Trujillo, and Ryan Sheckler all have their stances as goofy, when they are actually all regular.

Find a place to take a nap or a break, then throw down your board and take a nap. After your nap is over you will wake up with a new board. If you do this repeatedly, there will be numerous skateboards all over the place.

To hear a very small portion of Awesome R***, play Dead Kennedys-Uber Alles. Wait a few seconds after the track is finished. You should hear about a half a second of the introduction.

During the sequence when you rescue Boone from the Black Widows, the person riding the cow is Joel Jewett from Neversoft.

At Iggyz place by the entrance, there is a wood shredder (as seen as you first get into the skate park). It reads "Trespassers enter here" Throw your board into the mouth. The board will be shown coming out in shreds.

When you do a trick off a ramp into the air, and if it appears that you are going to crash, press RB to get off your skateboard while still in the air. You should land safely on your feet.

Once you get the telescope for the Skate Ranch, it should be on a barren solid concrete arch, on a wooden stand.

Go around to where the sign that says to dismount is located. There is a electrical box that serves as a ramp. Climb up to the top and get off your board. There is a pole on top that you can see electricity flowing through. Hit it with your board and you will see your character get shocked, and you will restart on the ground.

On the lowest level there is a door in a corner. Sticker Slap it and go up the quarterpipe. You will come down on another quarterpipe, and at the top of the screen the message "Yuck!" will appear.

While standing, tap RB(2) and your character will switch his board to the other hand.

When you have your special, click the Left Analog-stick to do slomo in single player and story modes.

While on your bike you can do tricks that you have not learned yet any time.

Once you get the spiral piece from the radio tower, you can get a major combo on it by standing in the middle and doing a manual. Whenever you are about to fall, just jump and you will be launched straight up into the air, where you can do some awesome aerial moves. Then when you land, continue to manual.

During the mission when you have to get a 2,000 point, 5,000 point, and 10,000 point combo, after the dinosaur comes down the bus that hits it has "THUG" on the front, which refers to Tony Hawk's Underground. However, if you check the front of the bus after or before the mission, it reads "THAW", referring to Tony Hawk's American Wasteland.

The man who helps you by using a rocket launcher on the escalator is a reference to D-Fens, the main character of the movie Falling Down.

On the bike, start a high score run. If you are about to wipeout, press Start and go to "End High Score Run". If done correctly, you will start again and you will not wipeout.

Select a female skater or create one with a skirt. Enable the "Perfect manual" code and do a manual. Then, do a handstand and position the camera so you can see up her skirt. All women in the game wear red underwear.

Flames And Sparks Without The Cheat

Do a Primo Handstand. When your skater is doing the handstand, immediately press RT. He will land the trick and there should be flames/sparks coming from his board. Note: This may require a few attempts. Also, you cannot do grinds, grabs, or anything to do with airing out of a half pipe.

Go up to the upper deck where the bleachers, air hockey tables, and drink machines are found. Find a Powerade machine. Stand in front of it and hit it with your board. A Powerade should pop out.

Go up on a roof with AC units. Kick one off of the building, then kick it to the place where the guard was when you had to skitch the dog. Get a friend to join you, and you can play soccer. The walls will be the goals.

You can see Chavez by the giant fence in the southwest corner of the map.

When the businessman pulls out his bazooka in the mission on how you get downtown, look at the person being blown down the escalator. It is Iggy.

Go to the clothes shop. You can run all around the store and thorough the clothes, unlike in the other shops.

Inside the casino on the ground floor are many slot machines which have scrolling massages across the top of them. Most will say, "Wheel of Torture..." in bright yellow text.

Play As Boone In Briefs

Enter "GrindXpert" and you will have perfect Grind

Enter JARMIE as a code.

At the cheat menu press Geeky Boy and when you play a game you will look like Harry Potter.

Enter h!tchar!de as a case-sensitive code. Note: The bar will still fill, but you will not fall when in the red.

Enter uronfire as a case-sensitive code.

Enter 2them00n as a case-sensitive code.

Enter "help1nghand" as a case-sensitive code under the options menu to unlock Mindy.

We have no unlockables for Tony Hawk's American Wasteland yet. If you have any unlockables please submit them.

We have no easter eggs for Tony Hawk's American Wasteland yet. If you have any unlockables please submit them.

We have no glitches for Tony Hawk's American Wasteland yet. If you have any unlockables please submit them.

We have no guides or FAQs for Tony Hawk's American Wasteland yet. If you have any unlockables please submit them.

We have no achievements or trophies for Tony Hawk's American Wasteland yet. If you have any unlockables please submit them.