Use the above links or scroll down see all to the Xbox 360 cheats we have available for Turok. 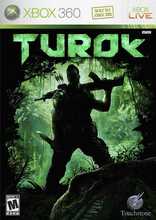 Dodge When Fighting The Water Beast

You have to have the flare gun when the monster attacks with its head flare its head then when it starts throwing rocks at you (as it heads under the water and its tentacles come out)take out your knife you are so much faster and when the monster starts throwing spike rocks at you if 1 hits you your chances of survival are 86% so use your knife and you will dodge better, tip2 when the blood is on its lips get its head over a red spot on the ground that is smoking and flare it, it will explode its head and do massive damage.

Find the shotgun, which I found on the left side of the map by a dead body, and keep using the flare to distract the Rex. While you are distracting, head towards on of the turrets in one of the corners of the map. Fire a couple shots and shoot another flare. Now head to a different turret. Keep repeating this pattern until the Rex falls. Then stab her in the eye and game over! Note: One flare wont distract the Rex long enough to let u get to another turret. So keep shooting flares until you reach a turret.

You will need practice in using the knife for this. The only thing that can hurt you while your doing a knife special kill is gunfire, or raptors that only appear at the end of the game that spit. So when your in a pack of raptors use the shotguns flare to start a distraction, then start using the knife, you might get hurt coming out of the knife kill because one raptor attacks you at the right moment but when you get good you can actually go from one knife kill right into another.

Turok can run faster when holding the knife in place of other weapons.

The knife and bow will kill most enemies quickly and quietly. It is best to use them when doing stealth kills. Tek arrow explosions will only draw attention unless you can kill all nearby enemies with just one shot. When stealth killing enemy soldiers, try to kill them in a place that will hide the body after they die, otherwise another soldier may see the body and alert his comrades.

In Story mode, crouch in tall grass. The enemies cannot see you unless you fire or they look directly at you for a few seconds. However, they will know where your teammates are.

Defending Against A Maul

Whenever you gets mauled by a dinosaur or insect, you can usually defend against it by beating the creature off Turok. However, if you manage to press the correct buttons quickly and hit only a few or no wrong buttons, there is a chance that instead of simply pushing the creature away, Turok with stab the creature to death. This can also happen if the creature mauling Turok has already taken a little bit of damage beforehand.

When fighting enemy soldiers with chainguns, do not attempt to knife them as they are immune and will always shoot you down before you get close. Also do not use the bow with normal arrows. They have very little effect on the chaingunners. However, Tek arrows will hurt them a lot. When using a sniper rifle against them, it is very difficult to get headshot on them. Body shots tend to take more than two hits on the chaingunners.

When fighting most dinosaurs, use the knife instead of guns. The knife is an instant kill, and you will save precious ammunition. The only exceptions for this are the Dilophosaurs and giant insects. For those, use some type of explosive or specific weapon to stun them or knock them off their feet for a moment before you knife them. Even on the Hard and Inhuman difficulty, you should still use the knife on the dinosaurs. You will die frequently unless you can get the timing done precisely. Since there are checkpoints before most fights, it should not matter.

An easy way to kill the giant Tyrannosaur is to quickly run to the giant tree in the middle of the nest site. Make sure you have a shotgun, explosive tip arrows, and grenades. Once in the tree, shoot a flare so that the dinosaur's head is in your line of fire. While she is looking at the flare, shoot as many explosive tip arrows as possible at or around the eye area. When she jams her head in the trunk to eat you, shoot her with the shotgun until she retreats. Once she frees her head, throw grenades. Repeat this until she falls. Then, quickly run over to her, and kill her with a knife through the eye. When fighting Mama Scarface in the final battle, you should have the bow and another weapon. When the battle starts, she will run towards you. In the direction you are facing are little lights in different areas of the battleground. To your far right (her left) is a light against a fence or wall that has the pulse rifle. It is the strongest weapon you will get in this battle; it is far better than the rocket launcher. As the battle starts, if you do not have it already, the shotgun is to your left near some boxes and a body. The flare helps and she will follow it, giving you some time to run from cover to cover. Travel the battlefield starting in the clockwise position, running from cover to cover using the flare as a distraction. When you finally reach about 4'oclock (the pulse rifle position), use it on her. Shoot for the head and make sure not to miss. Try to make sure it does not overheat. Circle the nearby box for cover, and unload the entire weapon. She should drop before it gets empty. Run at her with your knife, and press the Action button sequence on her. To defeat the T-Rex after defeating Kane, notice the containers in the level. Run to the containers and around them to find dead enemy bodies. Pick up their weapons and run around the containers shooting at the T-Rex. The ESUS Blackfly sticky bomb gun works very well. When the T-Rex falls, run over to its head with the knife to finish it off. At the start of the battle, you should have ten Tek arrows. Use them to shoot the T-Rex in the head while looking for the shotgun to your left. When you get the shotgun, circle around the box where the shotgun was found, and keep shooting her in the head while shooting flares to keep her disoriented. When the T-Rex fall, go to her head, and knife her. If done correctly, you should not have died.

Sometimes when you shoot a Scorpion with a shotgun or when an explosion is next to it, the Scorpion will flip over. You can run up to it and do a special knife kill. Sometimes when the Scorpion jumps on you and you have to press a series of buttons to get it off, you will stab it in the head.

When fighting enemy soldiers, it is best to use stealth whenever possible. They tend to bring in reinforcements and flank your position when they are aware that you are near. Also, most of the time the fighting will draw the attention of dinoaurs and insects, causing them to suddenly join the battle. When stealth is not possible, it is best to try to lure creatures into fighting enemy soldiers by using flares or by shooting dinosaur eggs from a hidden location.

For the small and even big dinosaurs the knife is really good to use because its quick and you don't waste ammo. You probably should only use your ammo when you are fighting the really big dinosaurs or the people enemies. Oh and if you want to use your knife on the people, then DO NOT try to sneak up on them because it wont work and they will catch you and shoot you/kill you, run towards them and kill them with the knife. Reload when ever you aren't fighting someone.

Kill 3 opponents within 4 seconds of each other in a ranked match.

Kill the Flag carrier 5 times in a ranked match.

Return 5 Flags to your base in one public game.

Kill the same player 5 times in a row without killing anyone else in between during a public match.

Kill 5 opponents in a public game with headshots.

Achieve an accuracy of 75% or greater with at least 20 shots fired in one ranked match.

Finish a public DM match with a Battle Rating of greater than 100.

Kill at least 1 creature, 1 enemy, 1 teammate, and yourself in the same round of a public match.

Play through a ranked match without dying.

Play a public match with no shots fired or kills awarded, capturing the flag at least twice.

Kill 20 Dinos in one public game.

Kill 20 Bugs in one public game.

Finish a player match free-for-all game with at least 10 deaths and 10 kills.

Play a full round of each gametype in public or private matches.

Knife kill your Rival in a public match.

Play a public match using only the bow or knife, earning at least 10 kills.

Destroy a dilo with the stickygun during a public match.

Kill at least one enemy with every weapon in the game during public play.

Participate in a public 6 on 6 team game.

Finish a ranked match with 100% accuracy and at least 5 kills.

Finish a ranked match with all headshots and at least 5 kills.

How aboot defending your flag, eh? And that's in ranked matches, sorry.

Head shot 10 enemies in a row during the Story Mode campaign.

Pin an enemy to the wall with an arrow in the Story Mode campaign.

Successfully fight off 20 Raptor mauls during the Story Mode campaign.

Get dinos to kill 5 soldiers by sticking them with the flare in the Story Mode campaign.

Kill 3 Soldiers with one Frag Grenade in the Story Mode campaign.

Pin 50 enemies with the Bow in the Story Mode campaign.

Successfully complete the game on the Normal or Hard difficulty to unlock the Inhuman difficulty.

We have no easter eggs for Turok yet. If you have any unlockables please submit them.

We have no glitches for Turok yet. If you have any unlockables please submit them.

We have no guides or FAQs for Turok yet. If you have any unlockables please submit them.

We have no achievements or trophies for Turok yet. If you have any unlockables please submit them.

Submit a cheat for Turok