Use the above links or scroll down see all to the PlayStation 2 cheats we have available for Ultimate Spiderman. 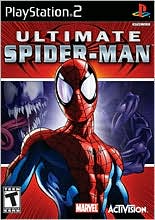 When you are in a city event where you need to rescue someone from falling, jump in the air near the falling site. When you get to the falling person press O. If you time good, you will land on the ground with the person in tow. Press O to put him down and you will have completed the event.

The Mui Ha Bang gang just takes patients and agility. You will have to work faster. Tips for just fighting the regular thug: You may have to stay on ground and switch combos beating on all of them; but notice how the regular thugs guard themselves like bosses, and that's where you will just have to keep moving to the next thug around you. Aerial attacks are good temporarily, because they do hurl the spinning axes and clubs which will take you out the sky. So just finish thugs off by ground breaking combos. Also when fighting a group of enemies, when one is knocked down ready to be webbed, it is difficult to stand in the middle to web them so web them up in mid air while jumping. Next, when fighting Lutinents: The big ones shirtless might block most of the time, but that's the easiest group to defeat. They only pack a sub- machine gun and a one hand melee spiky club. Notice they will always charge at you in a single file, almost, right at you. This will block the incoming fire from the gunman in the back. The brawlers charge up first and the shooters are behind. You must punch and kick the one by one, bounce off of walls, and land some ultimate hits. Like I said patience. You must not slow down, keep moving, and when they're finished, focus on the shooters. YOU WILL GET HIT when fighting this Asian gang, it just depends on how much you get hit. Also for the Lutinents, aerial combat is key, mainly you can start on the shooters in the back, take them out and finish the easy armless lutinents. Last, the Bosses: The female triad leader is a sticky situation, but JUST PATIENCE. All you do is work her like everyone else, but stay on her and jump a couple of feet away when she's about to attack, but don't go to far, she shoots fire spheres. AND USE THE GRAB BUTTON. Also use the web trap and web combination while hand to hand fighting. AERIAL COMBAT IS KEY! Get rid of the normal thugs and then use AERIAL COMBAT for the mixture of Lutinents and Bosses, just constantly be on the move, avoiding fire.

How To Defeat Electro

How To Kill Shocker

Who's Mission Is It?

When you beat the game, and Switch Hero is available, you can destroy stuff as Venom, but at the cost of being chased by NYPD. To prevent that,destroy a random car using tentacles ONLY! Then, when the car is on fire, pause for 5 seconds. If done right, the car will explode, and no police will appear. You can then destroy as many cars as you want.

In the beginning, when you get your web shooters, you can swing around before you battle shocker.

When You kept up with Shocker, you have to beat him plus keep Spider-Man alive. What you must do to beat him in 5 minutes is destroy all of the electric signs for which Shocker recharges on while distracting him from killing Spidey by throwing cars. Once all signs are destroyed, then you can kill Shocker. Throw cars and beat him up and you can also go near fire hydrants when water is coming up. Follow this, and you can defeat Shocker easily!

When you beat the game, chose switch hero and play as Venom. Now destroy something and a point setting will pop up. Now pause the game and click Unlockables and then click yes. Go back to the game play and police and army won't come after you.

Start the game and try to web swing (when you don't have your web) and Parker will say he's got no web, do it again, and again, then he'll get mad about how he has no web.

Go to the controller setup screen and press up, left, up, right, down, left.

Go to the controller setup screen and press right, down, left, up, left, down, up.

At the controller setup screen, press Up, Right, Down, Left, Down, Up, Right, Left.

Collect all tokens finish all races finish all combat tours collect all other costumes and complete game up to 100%. Or, complete 100 City Events, get all Tokens, and finish all Combat Tours and races

We have no easter eggs for Ultimate Spiderman yet. If you have any unlockables please submit them.

We have no glitches for Ultimate Spiderman yet. If you have any unlockables please submit them.

We have no guides or FAQs for Ultimate Spiderman yet. If you have any unlockables please submit them.

Submit a cheat for Ultimate Spiderman