Use the above links or scroll down see all to the GameCube cheats we have available for All-Star Baseball 2004. 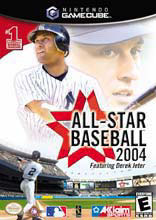 Press R when you are running the bases after hitting a homerun. Your player will blow kisses to the crowd. If you continue pressing R, your player will jump on home plate.

Use this trick to do a slide step. When your pitcher is in the stretch, select a pitch, and before you press Pitch, hold the Left Analog- stick.

Pick Off From The Catcher

When the ball is released, hold L and the base that you would like to throw the ball to. The catcher will then snap up and throw the ball to the selected base. Note: This only works when you are pitching.

When at the main menu in franchise mode, go to "GM Office", then "Roster Management", then "Disabled List". Look through your players to see which ones are tired (except pitchers). If a starting player is tired, you should bench and rest him for one game.

Demote Player Without Other Teams Claiming Him Off Waivers

Go to the player editor and make all his stats to D- so that no teams would want to claim him off waivers. When you want to promote a player back to the Major Leagues, change his ratings back to his default settings.

Start a franchise or continue an existing one. Make sure the "GM Control" option is set to all teams. Go to the GM Office, then to "Trading Block". Select any player not from your team and put them on the trading block. Then, select "Get Offers" and make sure the other player involved is also not from your team. When you select the other player, the screen will change to the regular trading screen. The person on the trading block will be in your team's section. Go to "Submit Trade". When the message stating that the trade was accepted appears, you should have the player that was not on the block. The player on the block should be on his current team and the other team involved in the trade.

Start a game with and set the skill level on anything except "Manage Only". Pause gameplay go to "Controller Select". Switch the controller to the team that you want to lose. Then, go into "Team Management" at the pause screen. Change the pitcher and the fielders to the wrong positions. You can also put pitchers in as pinch hitters. Then, return to "Controller Select" and change back to your original team. The CPU may switch the players around, but you can put the wrong ones in again. You will not get any card points if you play the entire game with the losing team. Note: there is a slight chance of your game freezing if player positions are swapped too often.

If you are down in the count or need a quick ball, pretend to lay down a bunt. Pull back while the pitcher is in his motion. This should result in a ball being thrown. Note: This only works up to two times in an at bat.

Wait until your pitcher has low energy then pause game play. If your pitcher is still on the mound, go to "Save Game and Quit", then save the game. Restart the system, and when you go to the main menu, load the game. When you finish loading, it should automatically take you back to the game, and it should show your pitcher on the mound with the full green energy bar.

Before playing in a franchise mode game, go to quick play, and on the team's options highlight "Change Uniform". Go back, exit quick play, load the franchise, and when you get to the play game screen on options, your pointer will be on the blacked out uniform part. Press A and you can change uniforms. Once you change lineups or pitchers, this option is no longer available; it only works for that one game.

Start a two player game and do not have a second player play the game. Throw a perfect game by striking out every batter. Save the game in the bottom of the 9th with two stikes and two outs. Finish the game, collect the points, and save options. Reload the saved game and repeat this as many times as needed to get an unlimited amount of points.

We have no cheats or codes for All-Star Baseball 2004 yet. If you have any unlockables please submit them.

We have no unlockables for All-Star Baseball 2004 yet. If you have any unlockables please submit them.

We have no easter eggs for All-Star Baseball 2004 yet. If you have any unlockables please submit them.

We have no glitches for All-Star Baseball 2004 yet. If you have any unlockables please submit them.

We have no guides or FAQs for All-Star Baseball 2004 yet. If you have any unlockables please submit them.

Submit a cheat for All-Star Baseball 2004