Use the above links or scroll down see all to the PlayStation 3 cheats we have available for Assassin's Creed II. 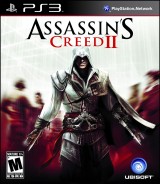 This is an easy trophy all you need to do is go to romana and inside the little city you go to the Tailor and you dye your clothes Wetland Ebony, and Wetland Ivory it should only cost you up to 2,500 flurons so have fun getting this easy trophy.

When all the codex pages are collected, they will be displayed on a wall in the villa. You will then have to solve the riddle that the codex pages hold. Hit O on the wall, then activate eagle vision to see the red figures on the codex pages. The outer most pages on the wall will make a boarder with the thin line that appears on them, connect the lines. The rest of the map is supposed to resemble a map of the world, with the Americas on the left, and Asia and Australia on the right most side. This needs to be completed to move on in the game.

How To Kill Brutes And Seekers Easy

First you need to have your fists out and when the brutes or seekers attack, time it right and counter attack them and once you have your weapon from them attack them and pull out your sword and maybe the weaker guards may start to run away.

After stunning a group of enemies with a smoke bomb, simply switch to the hidden (DBL) blade and kill each guard one by one by sneaking up from behind. By the time the smoke clears; all or most guards should be dead.

How To Assassinate Borgia Easy

When you are out of bullets and knives (I did this), select the hidden Blade (s), lock on him then press Square and blocks the assassination. After that he will be near the Vault trying to unlock it. You fight him with your fist and once is health is down, press the buttons that is displayed and you have eliminated him.

When Borgia blocks his death by an assassination, Ezio gets the apple of eden he will duplicate himself (Just like Al mulium did in Assassin's Creed), his duplicates will help you defeat him. The armor that the duplicates have is Leather, Helmschmied, Metal, and Missaglias. You, well if you unlocked Altair's armor, I think that is a good Idea to wear when battling with Borgia.

After finishing Sequence 6 you will eject from the Animus and you have to follow Lucy to the warehouse to practice to being an assassin. When you are finished with the training, you will be Altair again but you are not in the animus, in there you have to follow a person to a viewpoint in Acre and What! We have Maria, the Fake Robert De Sable in Assassin's Creed. Altair mates with Maria.

To get this trophy all you have to do is press R2 select your poison and try to find a archer poison him he will be to focused on the poison so he wont attack you then you climb on something around you and air assassinate him.

To get "Street Cleaner" Trophy is to hide 5 bodies in the hay just beat up 3 people and assassinate 2 people. (Do not assassinate 3 people because you will Desyncronize and I don't know if you hide 2 more bodies, you might get the Trophy. ).

You only need to have about 5 easy guards, now they will block your assassination but not like in Assassins Creed, they block it with their swords. It was so easy but do not be near other guards including the armored guards.

An easy way for any gamer to get this trophy is quite simple, yes guards run away once you kill four guards in a group, but I found an easy way to kill ten guards in one fight without getting hurt. In the fourth DNA sequence you are to defend Lorenzo while defending lorenzo there are 12 guards you only have to kill like six guards the rest strike from there backs. If you fail just die and retry ( I would advise counter kills).

In Florence you have to do a leap of faith on the Giotto Campanile. First of the building will stand out in the city it is white and dark blue. Now how I climbed onto the top is from the surrounding buildings. I climbed the building on the left of the Giotto and jumped and landed on the building then I had to climb until I found this broken window. Then you can climb in and there will be many things you can easily climb and the synchronize spot you can climb onto from the inside.

To kill guards easier just disarm them use your fists to block any attacks until your ready then disarm them and they have no way to attack you unless you give them a long enough chance.

When fighting guards with a spear, pike, or ax, you cannot counter their attacks. If you attempt to counter the attacks, you will most likely get your weapon knocked out of your hand. In order to kill the guards, hit x to strafe and then hit square to attack. Repeat until dead.

We have no cheats or codes for Assassin's Creed II yet. If you have any unlockables please submit them.

We have no easter eggs for Assassin's Creed II yet. If you have any unlockables please submit them.

We have no glitches for Assassin's Creed II yet. If you have any unlockables please submit them.

We have no guides or FAQs for Assassin's Creed II yet. If you have any unlockables please submit them.