Use the above links or scroll down see all to the Xbox 360 cheats we have available for Assassin's Creed II. 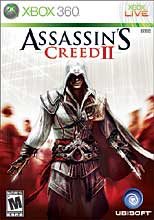 If you have been playing the game for a while you know there are pick pockets you can tackle/kill to get there money. I found that if you use 1 throwing knife (that makes contact) they will stop running and you receive their money (which is about 500 florines).

When you start the game pickpocket from every single person to easily get this achievement since guards haven't been introduced yet.

When your allies are in battle and your not in combat and the enemy doesn't notice/attack you just walk around and assassinate the enemy from behind and as lock as you don't press LT and attack just with x with just the hidden blade and they'll never attack you.

As you know, there are glyphs that Subject 16 has placed throughout the game and you have to solve the puzzles. Well at a certain point a certain point you will start to get code wheels. At first they they aren't missing any numbers/symbols (they will in time). I found that when the code wheel is missing 2 spaces (in the red area)You should align the missing spaces so that they co-inside with 2 of the numbers that in the code boxes (the gray part of the code wheel).

One easy way to get the No Hitter Achievement is using smoke bombs since it practically renders them defenseless and you can walk right up to them and kill them and if the smoke starts to clear just throw another one down.

When you are in an assassin's tomb with a chase sequence you have a chance to kill the running soldier before he can tell the others about you. If you do kill the soldier the o won't now you are there and you can walk past them. Walk past the guards and then get to a spot close to them where they can't see you and you can here one of the guards complaining. I found this in the Visitaione's Secret tomb.

For the no hitter achievement you have to kill ten guards without getting hurt. The easiest way I know to get this achievement is on the fourth DNA sequence you have to protect Lorenzo from twelve guards. But when your doing this task you truly only have to fight six to seven guards the rest should be an easy strike to the back with your sword (I would advise you to get counter kills).

We have no cheats or codes for Assassin's Creed II yet. If you have any unlockables please submit them.

We have no easter eggs for Assassin's Creed II yet. If you have any unlockables please submit them.

We have no glitches for Assassin's Creed II yet. If you have any unlockables please submit them.

We have no guides or FAQs for Assassin's Creed II yet. If you have any unlockables please submit them.

We have no achievements or trophies for Assassin's Creed II yet. If you have any unlockables please submit them.