Use the above links or scroll down see all to the PlayStation 3 cheats we have available for Assassin's Creed. 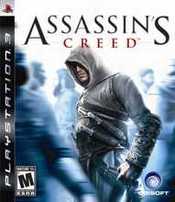 Kill A Guard A 2nd Time

When you kill the Guard with your sword and he is screaming, get your Hidden Blade and Assassinate the Guard, and you killed the Guard a 2nd time.

When running away from guards, they through rocks at you when you clime. Note! When you get the ability to grab back use it when running it can save your life, also if they catch up to you throw them of the roof. This should buy you some time to keep running and hid.

If you feel confident try using the hidden blade in combat. All you have to do is counter attack with the H.B. right before your opponent hits you.

You can actually throw beggars and other civilians without getting punished by guards, as long as you don't kill them. When you are in combat, you can also throw guards into markets/shops/stores. Then you destroy the whole thing and the guards get killed.

Collecting flags isn't just for cool. You actually save the game and replenish the health when you pick them up.

If your in a tight spot in Assassins Creed on PS3 an easy way to kill the gaurds are to grab hold of them, and throw to the ground. Then take out your hidden blade and assassinate them. This is what I do in this game and I actually killed Al Mualim in 5 mins with this technique.

In the game you have two computers you can access (Lucy's and Vidic's) and they show a story not in the animus. First vidic will get a call then leave and lucy makes you go to your room but come back out and she has left her access by her computer and after you go to bed you wake up and vidic is drinking and looking out the window, go behind him and steal his access (o). Get into the animus and enter the computers any and very chance you get.

A good way to get away from guards is by blending. You can blend by going to schalars and pressing X. You can also hide in hay. And you can go and sit on benches with two towns people siting on it, but if you run into them they will leave and you can't hide there anymore.

Go to Acre, look up find a cross on a church, try to clime the church (try not to fall)and go on the cross at the tip and there will be a short video of you on the highest point.

There are assassins in towns. They are there to help you out with your ancestor and your assassinations with out the game but you will have do to jobs for them like kill soldiers but to find them you have to go to a tower and "look out" and you can find one buy doing that to every tower. You see but you have a time limit. So be careful and you don't have to do them if you don't want to.

Get Out Of A Fix

If the alarm is raised and you are being chased and attacked by numerous guards, rather than attacking them one by one, use a more defensive strategy. By only countering, you can take them down one at a time and rarely if ever take any health.

You may not be able to directly fight someone with the hand blade in combat, but, like the short sword and long sword, you can counter. If you lock onto an enemy it'll automatically pull out the long/short sword, just choose the hand blade after locking on7y (make sure it is pulled out), hold block, and counter at the right time. You can do cool counters such as you stabbing them in the gut and throwing them. WARNING: YOU CANNOT BLOCK ATTACKS WITH THE HAND BLADE, SO YOU MAY/WILL TAKE A LOT OF DAMAGE! Unless of course you get the counter on the first try =)

Don't even think about assassinating while you are in combat. They will block you right away!

If you are climbing up on a building, watch out for the roof guards. They will give you a warning while they are aiming at you with the bow. Don't stay to long in their sight, at last they will shoot at you. Just killīem by running against them an press SQUARE (assassinate).

When you have assassinated a guard or a templar, press the X-button to blend. Then you enter a very low profile as an munch. If you do not blend, the guards will probably think that you killed the NPC (which you have) and attack you.

The easiest way to kill a Templar is to have your hidden blade ready, and then slowly walk around the Templar (or get close to the side of him if you can't get around him) and before he sees you, stab him with the blade and you have to worry about trying to fight him or anyone else who is alerted.

When the game is loading and in the meantime are given control of Altair, you can reach the boundary of that area by sprinting continuously in one direction. You will know you're close when the atomic symbols within the clouds start to disappear. Continue running and you should hit an invisible boundary.

Kill Anyone Without A Penalty

After you beat the game, when you go back to the story mode you can kill anyone without losing life.

Right, Down, Left, Up, X, Square, Triangle, and Circle.

Press L1, R1, UP, DOWN, L2, R2 (2) Then you will turn invisible be Careful you don't BUMP no one or you'll be visible again and the guards will chase you.

To get the cross bow you must complete the game three (3) times in a row on the same difficulty. ( I have to still try it on different difficulties).