Use the above links or scroll down see all to the Xbox 360 cheats we have available for Assassin's Creed. 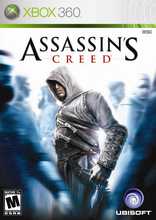 When you are in any city and you are jumping from roof to roof, you might run into a few guards. If you have the ability to throw knives, just get him in straight view, then equipped your short sword (it has the knives equipped with it) and click X. If it hits the guard, he will die. But if you miss, he will engage in combat and attack you so aim well before throwing!

To easily kill guards, throw one on the ground, and then repeatedly attack them with your sword.

When fighting guards, all you have to do is grab them and throw them on the ground. Then pull out your silent blade and you can assassinate them without them being able to block your blow.

When you fight, hold down RT (Right Trigger) to produce a defensive stance. Wait for the enemy to strike, and when they are about to hit you, press X (Blue Button that has an X on it) to deflect the attack and usually kill them instantly. If it doesn't kill them instantly, it will knock them down. This style takes a few tries to get used to, but when you get it, you become unstoppable.

If you have mastered the skill counter and know when to strike then select your hidden blade. Be warned it does not protect you from strikes. When a guard is taunting you go up to him and kill him you will jump on him.

If you ever want to quickly defeat a guard all you have to do is grab the guard and throw him into a merchant stand or wooden platform. It will instantly kill the guard and sometimes other guards standing by it as well.

How To Defeat The Fony Boss

In the game their is a boss who plays the actual boss that you fight later on in the game. In order 2 beat the boss you need to keep your distance because their is an army that is almost unstoppable. Use your throwing knifes until you run out, then finish em off with the short blade, it works.

When in a battle select the hidden blade and when they attack hit counter and its an instant kill if done properly.

After you complete the game. You can go to any town and kill any citizen without a penalty.

Kill Off Guards With Ease

When you kill a guard or a bystander, a guard will start to walk toward the nearby corpses. While he is walking switch to your hidden blade and you can take him out easily and no one will notice. If he gets to the body and asks "who did this", then don't attack him because he will block your attack and throw you away and you'll have to fight him and that might attract unwanted attention.

Blade In The Crowd

Kill one of your main targets like a true assassin.

Have a complete Synchronization bar.

Go through every dialog with Lucy.

Defender Of The People: Acre

Complete every free mission in Acre.

Defender Of The People: Damascus

Complete every free mission in Damascus.

Defender Of The People: Jerusalem

Complete every free mission in Jerusalem.

Disciple Of The Creed

Assassinate all your targets with a full DNA bar.

Defeat 25 guards in a single fight.

Enemy Of The Poor

See 85% of all the memory glitches.

Keeper Of The 8 Virtues

Find All Hospitalier Flags in Acre.

Keeper Of The Black Cross

Find All Teutonic Flags in Acre.

Keeper Of The Creed

Find All Flags in Masyaf.

Keeper Of The Crescent

Find All Flags in Damascus.

Keeper Of The Four Gospels

Find All Flags in Jerusalem.

Keeper Of The Lions Passant

Find All of Richard's Flags in the Kingdom.

Keeper Of The Order

Find all Templar Flags in Acre.

March Of The Pious

The Hands Of A Thief

The Blood Of A Doctor (secret)

The Blood Of A Corrupt Merchant (secret)

The Blood Of A Liege-lord (secret)

The Blood Of A Nemesis (secret)

You've slain Robert de Sable, but there is one more...

The Blood Of A Regent (secret)

The Blood Of A Scribe (secret)

The Blood Of A Slave Trader (secret)

The Blood Of A Teutonic Leader (secret)

The Blood Of The Merchant King (secret)

The Punishment For Treason (secret)

You have found the traitor and have brought him before Al Mualim.

Visions Of The Future (secret)

A strange vision has appeared to you. What could it mean?

Welcome To The Animus (secret)

Symbols at the end