Use the above links or scroll down see all to the PlayStation 2 cheats we have available for Dynasty Warriors 5: Xtreme Legends. 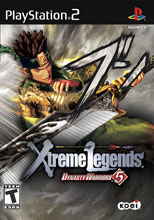 Go to legend mode and play ten eunuchs rebellion on normal difficulty and play as Yuon Shao. Once you start playing go to the north east corner and defeat all of the officers with names over their head the last person you have to defeat Coa Jie. once he is defeated the screan will say avaluble item has appeared. A red and goldish box should appear nea the north east corner, breack it open and inside a red item bag shuold apear get it, beat the game and you shuol have a new item.

We have no cheats or codes for Dynasty Warriors 5: Xtreme Legends yet. If you have any unlockables please submit them.

Play any level in Free mode on the Hard or Chaos difficulty setting and kill 1,000 enemies. You will get a message indicating that you have received a unique item. Note: You do not have to find an item box; it is automatically awarded to you.

Play any level on the Hard difficulty setting and get 1,000 kills to get Fu Xi's Great Sword.

Play any level on the Hard difficulty setting and get 1,000 kills to get Nu Wa's Rapier.

Play the Battle Of Hu Loa Gate and equip Crane Deck and True Musou. Make sure Zou Ci's stats are at least at three quarters full at character selection screen. Fight all officers on the left side of the map. Defeat two more officers before the gate. Have Musou Full and Musou Token. Open the gate, then stand exactly where Lu Bu will be. Immediately after the FMV sequence, start to Musou attack. Lu Bu will then appear. When he does, he should be getting hit by the Musou attack. He will die at about six hits from the Musou attack. The reason this happens is that he is not powered up or glowing. This will require practice.

Play the Battle Of New Castle (Sima Yi, Xu Huang, Cao Pi). Kill 80 men, then kill all four generals outside of the castle before the gate opens. This item increases defense every 100 kills.

Play the Battle Of Mai Castle level (Guan Yu, Guan Ping, Xin Cai). Get 1,000 kills and a message that a precious item is in the castle will appear. This item increases the duration and damage of Musou.

Play the Battle Of Qi Mountain level (Zhuge Liang, Wei Yan, Jiang Wei). Kill all enemy generals and sub generals. A precious item report will appear after the last one is killed. This item allows you to jump during charge attacks.

Play the Battle Of Han Shui level and wait for Xu Huang to appear. When he is given the order to charge your main camp, defeat him. This item raises your attack, but also lowers your defense.

Play the Duel In Nan Zhong level (Meng Huo, Zhu Rong). Kill Xu Huang in less than ten minutes or before the beast troops get through the center. This item makes your animal stronger.

Play the Ten Eunuch's Rebellion level (Dong Zhou, Yuan Shao). Allow Dong Zhou's fake Ten Eunuchs plan to succeed and defeat the Bandit leader four times. This item allows you to block at the moment an enemy attacks to get a +50 Health.

We have no easter eggs for Dynasty Warriors 5: Xtreme Legends yet. If you have any unlockables please submit them.

We have no glitches for Dynasty Warriors 5: Xtreme Legends yet. If you have any unlockables please submit them.