Use the above links or scroll down see all to the GameCube cheats we have available for Freaky Flyers. 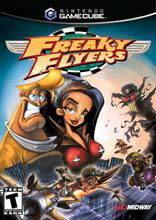 In the Danger Island level, in the jungle area fly by or shoot the snake on the vine to unlock Island Jack.

In the Cave Of Blunders level, fly down near the ground. If you see two people; a big man in black who is trying to kill Sheik Abdul. Shoot the killer to unlock Sheik Abdul.

In the Bandito Attack level, go around the course and look for a movie star. Shoot him to unlock Atomic Johnny.

In the Torpedo Run level, look on the radar. There will be two blips. Go left and shoot the yellow submarine to unlock Professor Guntentaag and Sven 209.

In the Bombsburg level, Queen can be unlocked on the right side in a pipe after exiting a tunnel.

In the Bombsburg level, fly through the building on the left side of the factory entrance to unlock Marcels Moreso.

In Bigfoot Mountain level, go straight at the start. You will see a house. Shoot the snowman to unlock Andre Latoilette.

In the Coyote Canyon level, go down to the cowboy town. Look for a girl that is going to be hung. She is Cactus Rose. Shoot her to unlock her.

In the Coyote Canyon level, in the cave look up at a purple thing. Shoot it and go up. Look for an unlock signal to get the Bandito for race and dogfight mode.

In the Monster Isle level, kill the monkey ninja near the roof of bamboo forest shrine to unlock Sammy Wasabi.

In the Monster Isle level, look behind the buildings on the left side to unlock the Rubber- Suited Monster.

In the Grave Danger level, shoot the tombstone on the left side of the graveyard to unlock Baron Von Slaughter.

In the Thugsville level, fly into the first train tunnel and get the unlock signal to get the Purple Gremelin for race and dogfight mode.

In the Cave Of Blunders level, complete the level perfectly by flying through the left doorway of the castle to unlock the Genie.

Unlock In Race Modes Only

To unlock the Marcel Moreso Brothers, fly through Bombsburg until you reach the section of hollowed out buildings near to entrance to the factory. Search the second one on the left and the Brothers should be hiding there.

On Danger Island, fly down the waterfall and follow the path until it reaches a fork. Fly down the left path and shoot the large yellow snake to unlock Island.

In The Intestinal Track level follow the main path and fly into the yellow circle power up.

At the begining of the race in Coyote Canyon, fly through the town until you reach the very end and you should see a hanging platform with Rose standing on it. Shoot her down and she'll be yours.

On Bigfoot Mountain, fly to the log cabin at the start of the race and shoot the snowman standing near the porch.

Name your file ZENBU and you will get everthing for free.

We have no unlockables for Freaky Flyers yet. If you have any unlockables please submit them.

We have no easter eggs for Freaky Flyers yet. If you have any unlockables please submit them.

We have no glitches for Freaky Flyers yet. If you have any unlockables please submit them.

We have no guides or FAQs for Freaky Flyers yet. If you have any unlockables please submit them.

Submit a cheat for Freaky Flyers