Use the above links or scroll down see all to the PlayStation 2 cheats we have available for Freaky Flyers. 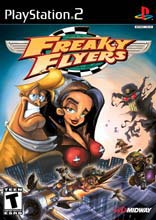 In the last Race Level "Grave Danger" after flying through the castle you will enter a graveyard. Fly to the right and look for the headstone that glows with a green light. Shoot this and you will be rewarded Baron Von Slaughter.

Finish the race "Coyote Canyon" in first place with all subgoals completed.

Unlock In Race Modes Only

To unlock the Marcel Moreso Brothers, fly through Bombsburg until you reach the section of hollowed out buildings near to entrance to the factory. Search the second one on the left and the Brothers should be hiding there.

On Danger Island, fly down the waterfall and follow the path until it reaches a fork. Fly down the left path and shoot the large yellow snake to unlock Island.

In The Intestinal Track level follow the main path and fly into the yellow circle power up.

At the begining of the race in Coyote Canyon, fly through the town until you reach the very end and you should see a hanging platform with Rose standing on it. Shoot her down and she'll be yours.

On Bigfoot Mountain, fly to the log cabin at the start of the race and shoot the snowman standing near the porch.

We have no unlockables for Freaky Flyers yet. If you have any unlockables please submit them.

We have no easter eggs for Freaky Flyers yet. If you have any unlockables please submit them.

We have no glitches for Freaky Flyers yet. If you have any unlockables please submit them.

We have no guides or FAQs for Freaky Flyers yet. If you have any unlockables please submit them.

Submit a cheat for Freaky Flyers