Use the above links or scroll down see all to the Xbox cheats we have available for Gun. 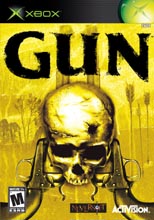 Whenever he shoots at you stay hidden behind something and duck down. Every time he gets up from his spot to shoot pop up and head shot him. This should hurt him easier, and don't forget about the chandeliers just shoot them and they should fall on him if you time it right.

Next to the crane in Dodge City.

In the patch near the house with cows and horses.

Next to the Indian Trader.

Go to the the tracks near an opening and he is in there.

If you do not know what you are doing sometimes you will win if you bet alot of money because the computer players will fold and you will win by default and you can win alot of money in the poker tournaments and buy loads of upgrades.

To beat Mcgruder, it helps to get as far away as possible. After you have, make sure what side of the circle of huge rocks. Duck behind the rocks so he can't see you. If he's on the inside, get on the outside part and vice versa. After you spot him, don't keep you're eyes off him. You should have the arrow that shoots dynamite. I he walks toward you, walk alway from him while crouching.(MAKE SURE HE DOESN'T SEE YOU!) Watch his feet. Use you dynamite bow and shoot at the cracks on the floor.(make sure you time it right so the dynamite explodes when he walks over it) After lowering his blood to a certain point, Mcgruder will run to a high ledge like the coward he is. Now stand in between the entrance and and Mcgruder, because if you move too close to the enterence some guys will start shootin' at you. Here the hard part. Crouch behind a rock while facing Mcgruder. He`ll throw dynamite at you. you have to shoot it in mid-air and as close to him as possible. Do this over and over until you beat him.NOTE: I`m not sure if it`s depending on the difficulty but after Mcgruder starts throwing dynamite, you are able to die without having to fight Mcgruder from the start.

After the required side quests are completed, obtain this by completing all hunting missions.

After the required side quests are completed, obtain this by defeating Hollister.

After the required side quests are completed, obtain this by defeating Reed.

After the required side quests are completed, obtain this by defeating Hoodoo Brown.

After the required side quests are completed, obtain this by completing all of the Pony Express missions.

After the required side quests are completed, obtain this by finishing the story mode for 100% completion. Next, go to Macgruder Mine and get your rewards.

We have no easter eggs for Gun yet. If you have any unlockables please submit them.

We have no glitches for Gun yet. If you have any unlockables please submit them.

We have no guides or FAQs for Gun yet. If you have any unlockables please submit them.

Submit a cheat for Gun