Use the above links or scroll down see all to the Xbox 360 cheats we have available for Lost Planet: Extreme Condition. 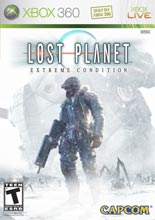 When up against the small drill tanks use a shotgun at point blank range. Two shots usually do the trick.

How To Kill Green Eye

Green Eye is at the end of mission 6, I just recently killed him and it was not easy! Destroy all the green “t-eng” or Thermal energy pouches by going on top of one of the ledges and holding both triggers and firing at them. Once you have destroyed all of them there are four more on its forehead destroy those and the will turn into one big one. Keep firing at it until dead and it will skip to a clip –notice how I didn’t say short- **I didn’t use any other weapons and I think it is more efficient and works better**

Trying to defeat giant moth? I just recently beat the game and on the way i defeated the Giant Moth (this is for an achievement point. You do not have to kill it) do not try and kill it the first time you encounter it. The second time you encounter it (when it flies over and knocks you down) keep going to the top of the hill as you would normally when you about 3/4 to the top to the left there will be a VS laser gun pick it up (you have to hold it the whole time) go all the way up the mountain and you'll see a path you have to walk on to go where you need to go - stay on that path and when you see it about to fly charge it up and shoot it. Repeat until dead, trust me you'll know when its dead. (only recommended if you have enough t-energy.)

When you enter a new VS, there's a "startup" animation that shows the suit powering up. While this is going on, the suit is impervious to all attacks. If you're fighting a boss or in a situation where you know a big attack is coming, wait until the right time to enter the VS. If you do, you can absorb all the damage without penalty.

If you're in a race to get to either a data post or a VS, use the zip line to cover the distance quicker. Hit X again about halfway up the line to cancel it out and skip the jumping animation that follows. You'll get there first every time.

Thrown a grenade that's missed its mark? Just shoot it. Wayward grenades can be detonated at any time by one bullet. This is extremely helpful in taking out enemies on higher ground. Toss the grenade up and shoot it before it lands to explode towers, cover and pesky Vital Suits.

Get to level 50 in online battle.

Waste 10 opponents in a row without dying in online battle.

Find all target marks in Mission 01.

Collect all four types of medals in matches online.

We have no easter eggs for Lost Planet: Extreme Condition yet. If you have any unlockables please submit them.

We have no glitches for Lost Planet: Extreme Condition yet. If you have any unlockables please submit them.

We have no achievements or trophies for Lost Planet: Extreme Condition yet. If you have any unlockables please submit them.