Use the above links or scroll down see all to the PC cheats we have available for The Elder Scrolls IV: Oblivion. 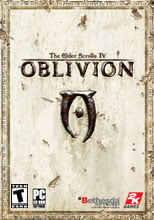 To join the Dark Brotherhood all you have to do is murder someone. I recommend a beggar, because they are not important to the storyline of the game.

Go to the Imperial City, Read the wanted poster for the Gray Fox, then go to any beggar, talk to him/her, click on Have a coin beggar 16 to 35 times (depending on the beggar) then ask about the Gray Fox. If he/she reply's that he is a fairy tale, click on have a coin beggar a few more time. if he/she asks you why, tell him/her that you want to work with him, then do what he/she says.

Go to the Imperial City Arena, and bet on a match. Go through the door and turn right, there is a guy called Roderic Pierrane and you can shoot him with arrows anywhere except his head. They just go right through.

The minute that you become level 10, go straight for the Shrine of Nocturnal. It can be found in the wilderness just north of Leyawiin, on the east side of the Lower Niben. By completing the "Nocturnal" quest, you are given an unbreakable lockpick and a continuous 40 point security boost for the rest of the game. This really helps when you are in the Thieves Guild or the Dark Brotherhood quests.

Go to the Arena, and go where the archer is practice shooting! He will shoot arrows and they will either miss or hit the target, and then go and grab the arrows! Don't worry, you do not have to sneak or anything, just go and grab them!!!

If you press~ and enter "killall" everybody in that room is death except important humans.

First press the ~ key to bring up the menu. Then type in oco testinghall to be transported to a room with a ton of doors. One room in the hall has all the weapons in the game, while another has all the armor.

First press ~ and type SetPCFame and you will get fame. It is very felpfull when buying a house or asking a question.

The cheat "player.additem 0000000f 10000" will bring up 10,000 gold; at the beginning of the game, head to Rindir's Staffs in the Imperial Market District. Then Buy Apothesis with your new gold(just in case you're poor). Good for beginners, and especially for the early arena matches; it only has 12 charges, but packs a punch.

Set A Bouty On A NPC

First, type "~" then click on the Oblivion Gate, then type "closeobliviongate" and the gate will close.

Got to cheat menu ~ and type in player. AdvAV (skill or att) then type what level you want it to be 1-255 this code is case sensitive.

Press ~ and type in "psb" and you will get all spells.

First push ~, then click on the door, chest, or gate you wish to lock. Type in lock, pushenter and it will have a low level lock.

Press the "~" key, click the door, type "unlock", and press enter. When you press "~" again to exit the cheat engine, the door will be unlocked.

When you see an enemy, hit the "~" key, then click on them and simply type "kill" and press enter. They die instantly.

Open the game console (~) and type "tfc" (without the "") Then you can basically fly out of your body and look at yourself, and still be able to attack. (Great for making movies)

Open the game console (~) and type "tcl" (without ""), and you can go through anything and walk on anything! (Including air)

First press ~ to open up the console window. Then type "advskill (skill)" to instantly level your skill up!

First press ~ to open up the console window. Then type "advlevel" to instantly level up!

We have no unlockables for The Elder Scrolls IV: Oblivion yet. If you have any unlockables please submit them.

We have no easter eggs for The Elder Scrolls IV: Oblivion yet. If you have any unlockables please submit them.

We have no glitches for The Elder Scrolls IV: Oblivion yet. If you have any unlockables please submit them.

We have no achievements or trophies for The Elder Scrolls IV: Oblivion yet. If you have any unlockables please submit them.

Submit a cheat for The Elder Scrolls IV: Oblivion