Use the above links or scroll down see all to the Xbox 360 cheats we have available for Tom Clancy's Rainbow Six Vegas 2. 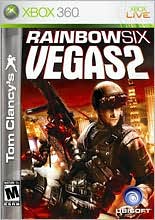 You will need C4 and smoke for this go to prasideo on realistic and put it on lone wolf when you spawn go around the car until you find four boxes two next to a wall with a repel and the other across from them now throw a C4 on the ground right in the middle of the two boxes farther from the repel then turn around to the other boxes and throw your smokes and crouch down in the smoke and face your C4 then turn on your thermal glasses and wait for the 7 to 8 guys to come out and then blow up the C4 after that go into the door to the left and you should see so stair walk up a little bit and trow the other C4 and 3 to 4 guys should come down and blow it up the C4 and you need you then run around to kill yourself and do it over and over again. that is how I got 17 levels in 3 hour or less it is very easy.

Easiest way to get CQB exp, I think, is if you find a group of people and your annoyed throw a smoke grenade run in with a shotgun or a machinegun and open wide it will get you really good experience for which ever type of weapon it is.

This works best if you put it on realistic mode. You will also need a shotgun. Go to single player, terrorist, go straight a little, and you will see a ladder. Order your team to move to ladder. The command is team 'use' hunt, mission: Vegas junkyard, enemy density low. Also, it will say lone wolf. Put no on lone wolf. Wen it pops up, walk straight ahead. You will see a pillar with a sign with a p and a red circle and slash on it. Walk to the right and you will see a ladder. Go down the ladder. Walk straight and turn right. You will see some barrels. Order your team to hold at that position. Then you keep walking. There might be an enemy right there already, so keep your hand on the trigger. If there isn't, walk up until you are a few feet from the ladder. Stop, and shoot your shotgun about 5 times. Then wait and keep your gun aim on the middle of the ladder. Enemies will come, and you will see their shadows on the walls on your right and left. Wen they come down the ladder, easy cqb points, and kills.

If you get to the level of an elite you can customize your camo colors.

An easy way to get lots of XP is to go to terrorist hunt and set your difficulty to realistic. This way each kill is 10XP. If you want more just go to an xbox live match and it gives you 25XP for each kill.

First, you have to be team leader. Second, look for the enemy leaders star. Third, go to the closet in villa. And last, shoot directly at the star with a desert eagle, or a raging bull. After you do all those steps, you'll kill the enemy leader. (Make sure the enemy leader doesn't move at all when you shoot).

You know about marksman points, CQB, and assault points. A certain amount of points gets you a certain reward. To see what your next reward is simply hit start in game play and go to A.C.E.S. Under each category is your current points and your next reward. The aces menu can also be found in the main menu under "My Character". From there go to rewards. you can see your aces and rewards for certain rankings here.

On the level called Ambush, you have to disarm a bomb. When you get to the bomb, tell your team to disarm it. when the guy squats down to disarm it, look at the door closest to the bomb. Throw a grenade at the door, and when you do turn around and look upstairs at the turret. There should be a guy at the turret, shoot him. Then look a little to the left of the turret and there should be a guy there too. Now all you have to do is shoot at that same spot until you run out of ammo in both of your guns. After that bring out your pistol and hide. When the guy disarming the bomb is wounded jump out and shoot the people upstairs until help arrives.

I Prefer My Terrorist Well Done

In the Rainbow Six Vegas 2 level Chase, you must chase after Miguel Cabrero, who has a lot of guys to cover him as he runs. After your round a corner in the Residential Vegas, your guy will yell "Miguel, stop!", and then Cabrero will run into a broken fence, and a bunch of guys will come to fight you. If you get up against the fence before going into the house's yard, you will see a grill with one of Cabrero's guys next to it. Aim your gun at the grill and fire a few rounds, and get back behind the fence. It'll explode, most of the time "cooking" the guy behind it. It'll give you Assault Points, and it's a good way to get some.

If you see one person do not shoot until he shoots. Then hide and they will come right to you and a easy kill.

Enter the code comcast faster in extras screen to unlock a free upgraded map from comcast. When you enter comcast faster code make sure you "space" between the words.

While customizing your character hold down RB and press up, y, down, A, left, X, right, B, left, left, right, X.

We have no unlockables for Tom Clancy's Rainbow Six Vegas 2 yet. If you have any unlockables please submit them.

We have no easter eggs for Tom Clancy's Rainbow Six Vegas 2 yet. If you have any unlockables please submit them.

We have no glitches for Tom Clancy's Rainbow Six Vegas 2 yet. If you have any unlockables please submit them.

Use Your Guns to Your Advantage and Other Tips

We have no achievements or trophies for Tom Clancy's Rainbow Six Vegas 2 yet. If you have any unlockables please submit them.