Use the above links or scroll down see all to the Xbox 360 cheats we have available for Tomb Raider: Legend. 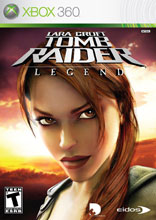 When you go into the chamber at the temple, you have to get three balls in the three indents in the ground. The first ball is just sitting there. The second ball is in the statue on the right side. Put the first ball in the indent on the right side of the temple. Then Go up the ladder, climb on the ledges, and push the ball off the cliff. The third ball is in the ststue on the left when Laura first walks in. Use you grapple hook to pull the statue over. The third ball will then pop out. Put the three balls in the indents and then continue on. Have Fun!!!

Before you can get the gold artifact, you must complete the Bolivia level. Otherwise, the rest of the manor will be closed off. After you enter the manor, get the grapple. It is located in the computer room in a safe behind Zip. To unlock the safe, use a laptop on the floor. After you get the grapple, get the pistols in Lara's bedroom. To get the pistols, there are two knives that both need to be pulled. Then, go head to the library. To your right is a wall that can be broken by shooting it. Once that is done, move the bookcase in the wall to one of the pressure switches on either side of Allister's desk. Then, use the grapple to get down the other bookcase, which is above the pressure switch on the right. Put that bookcase on the other switch and a wall will open up. Grab the PLS on Allister's desk. In the dark hallway is a switch. After you pull it, a large stone tablet with a clue will come out of the wall. The clue reads "Above the Waters, Twin Sisters turn their backs one upon the other to leave the Ambages unguarded". Go to the end of the hallway and pull the second switch. Another wall will open up and lead you back into the bedroom. With the first clue in hand, go to the pool. On the right side of the pool there are two fish statues that can be pulled out. Do so, then jump onto the shortest one. Jump on to the pole, swing to the ledge, jump to the other statue, onto the second pole, then onto the balcony. There are two Greek statues. Rotate them so they face away from each other. Once they are in position, another clue will appear: "Within the Hall of Knowledge, Tomes of Cerulean, Topaz, Viridian and Crimson in turn reveal their Arcanum". Go back to the library. Push in the blue book to the right of the door. Then, go to the small room upstairs. Push in the yellow book, then the green book, outside the room. Go back downstairs and push in the red book. After you do this, a wall will open, revealing the third clue: "Above the Hearth, revealed visage and countenance touched in haste raise up the Steward". Go back to the front lobby. To the right of the door leading to the library is a switch that just came out of the wall. Before you use it, use the grapple to pull out the poles leading to the other switch. After that, push the switch, swing to the other side, and use the other. The fourth and final clue then comes out of the wall: "The risen Athena turns to face the Sun, whose burden then reveals the Golden Laurel". A statue has arisen in the middle of the front lobby downstairs. Turn it so that it faces the window above the stairs then stand on the pressure switch. The statue then goes back into the ground and a stone pillar with the Golden Artifact appears from the ground in its place.

At the end of the level, when you stand on button that opens the timed door, do not enter that door. Instead, go to the under the door to find a golden statue.

When you reach a room which has a hanging dragon in it, you will find a large red box. Throw it to the floor to break it. You will get a gold statue that gives you a new costume.

On the first rope in Bolivia, turn left to find the cave that has the silver reward.

In Croft Manor, on the right-hand side of the main stairs is a portrait of Kain, as it appears in Legacy Of Kain: Defiance. Eidos, producer of Tomb Raider, also produces the Legacy of Kain series.

After the creature is released, run around the dome. Turn the switches on by pressing Y. When you have pressed all the switches, four balls with come down from the ceiling. Get onto the magnetic gun in the middle of the room. Make the balls come to you by using the magnetic gun. This might take some time because the monster will keep knocking you of the gun. When you have all the balls pointing towards you, a chamber will open above your head and the sword fragment will appear. Get off the gun and point up towards the sword fragment and grapple it. When you have it, an intermission sequence will begin and the level will end.

At the beginning of the level, look to your right to see a soccer ball. You can shoot the ball around with Y. Hit it past the dummy in between the fences and for a goal.

Collect all the silver rewards from a level to unlock all object models from that particular location.

Collect the indicated number of bronze rewards to unlock the corresponding character profile.

Collect the indicated number of silver and bronze rewards to unlock the corresponding pistol upgrade.

Having trouble with time trials? Try completing the final time trial in Bolivia against the final boss first (it's a boss fight, and it's easy). This unlocks the one-hit death cheat. You can input the cheat when the cinematics are playing at the beginning of a stage and make enemies and certain bosses die quickly, saving you some much needed time. It also makes the motorbike races faster to finish. Note that only one cheat may be turned on at a time.

Hold LB and press A, RT, B, RT, LT, X during game play. A sound will confirm correct code entry. To unlock this code, successfully complete the game with a 100% completion.

Hold LB and press Y, A, B, RT, Y, LT during game play. A sound will confirm correct code entry. To unlock this code, complete the Nepal level in Time Trial mode under 13:40.

Hold LT and press Y, A, Y, X, LB, B during game play. A sound will confirm correct code entry. To unlock this code, complete the Bolivia Redux level in Time Trial mode in under 4:15.

Hold LB and press B, Y, LT, RT, A, B during game play. A sound will confirm correct code entry. To unlock this code, complete the Peru level in Time Trial mode in under 21:30.

Hold LB and press LT, Y, RT, B, LT, X during game play. A sound will confirm correct code entry. To unlock this code, complete the Kazakhstan level in Time Trial mode under 27:10.

Hold LB and press RT, B, X, LT, X, A during game play. A sound will confirm correct code entry. To unlock this code, complete the Ghana level in Time Trial mode under 20:00.

Hold LT and press LB, A, B, A, Y, RT during game play. A sound will confirm correct code entry. To unlock this code, successfully complete the game.

Hold LT and press X, B, A, LB, RT, Y during game play. A sound will confirm correct code entry. To unlock this code, complete the Bolivia level in Time Trial mode under 12:30.

Hold LB and press A, B, A, LT, X, Y during game play. A sound will confirm correct code entry. To unlock this code, complete the Japan level in Time Trial mode under 12:15.

To unlock the white and black swimsuits for Lara you must complete the game, find all the rewards (including the ones in Croft Manor) then complete the game again under the time trial difficulty. Complete Bolivia Redux in time trial mode. This will allow the use of the "One Shot Kill" cheat which will help significantly. Note: This will also unlock everything else in the game, including the pistol upgrades, another thirty costumes, and the "Wield Excalibur and "Wield Soul Reaver sword" cheats.

We have no easter eggs for Tomb Raider: Legend yet. If you have any unlockables please submit them.

We have no glitches for Tomb Raider: Legend yet. If you have any unlockables please submit them.

We have no guides or FAQs for Tomb Raider: Legend yet. If you have any unlockables please submit them.

We have no achievements or trophies for Tomb Raider: Legend yet. If you have any unlockables please submit them.