Use the above links or scroll down see all to the GameCube cheats we have available for Viewtiful Joe. 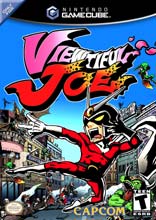 This one is kind of complicated. What you have to do is wait for him to start running and shooting the bolders out of his back. When they land use hyper speed to destroy them and you will simultaneously catch fire, this will make you immune to his fireballs. Then while you're still on fire run up to him in hyperspeed and hit him. This will disable his fire ability temporarily. Then he will try to hit you and you have to keep figting him in SLOW until you break his sheild. Hit him once or twice more and he'll go into a hyper spin much like the ballerena robots. Dodge 5 of his attacks in a row w/out getting hit and he'll get dizzy, but only for a second or two so be quick because as soon as you hurt him bad he'll try to hit you and jump into the fire. Repeat the process.

When you first start the battle, he'll be jumping around and trying to ram you. Easy to dodge. Just keep hitting him in slo-mo, whether he blocks it or not. When his ax breaks you have about 30 seconds to beat the livin-bajesus out of him. Sometimes, he'll throw his ax or make missles come out of his desk. Hit the missles to make them go after him, and dodge his ax. And if you ever catch fire during this, use hyper-speed to cool yourself down.

The beginning of the match is when you can do the most damage, until he fills the room with water. You can't block his attack where he chatters at you, so don't try, just jump around to dodge him. Don't leave him alone in the water, or else he'll start to regain health, fast. When he fills the area with mines, this is your chance to drain the water. Get to where a mine is in between you and him. When he chokes on it, slow time down, punch the mine in his mouth, and keep time slowed down to make the explosion bigger, draining the water.

This match is actually easier than the rest, it's just longer. He's only got 2 attacks, 3 if you count the plane he pulls out. He'll either surround you with 4-6 copies of himself, while other copies appear out of no-where and glide towards you to grab and punch/kick you, or, he'll attack you first hand. Slow time down and attack him when he's next to you. After about half-way through his health, he'll bring out his (your) plane to help him. 3-4 hits will take it down, 2 hits to make it fall to the ground. You'll get a hamburger when/if you destroy it. Keep hitting Another Joe until he's down, and your done.

When the match first starts, you should be able to do quite a bit of damage before he first attacks. When he shoots up to the ceiling and you see the spikes coming down, slow down time to easily dodge them. When he shoots towards you, slow down time and punch him before he hits you. He'll fall to the ground. Use hyper-speed to attack him before he gets back up. When he's flying, hit him in slo-mo to break him up into a ton of smaller bats. Each small bat you destroy will deplete his life even more. Do this until he's dead.

He's got a couple of attacks. Sometimes he'll shoot bolts of lightning at you. He'll also electrocute rocks that will float around and shock you, you can jump on them though. You can hit the swords he throws at you and make them shoot back at him. When he gets next to you on the ground, try to hit him in the pool of lava. If you do, he'll appear in the water fountain. Now go beat him up. Repeat.

Beat the game in Adult

Beat the game with a Rainbow V ranking for every level. Then select a character and press Z

Beat the game on Kid's Mode

Beat the game in adult mode.

How To Play In Ultra Vrated Mode.

Beat the game in Vrated mode.

We have no cheats or codes for Viewtiful Joe yet. If you have any unlockables please submit them.

We have no unlockables for Viewtiful Joe yet. If you have any unlockables please submit them.

We have no easter eggs for Viewtiful Joe yet. If you have any unlockables please submit them.

We have no glitches for Viewtiful Joe yet. If you have any unlockables please submit them.

We have no guides or FAQs for Viewtiful Joe yet. If you have any unlockables please submit them.

Submit a cheat for Viewtiful Joe