Use the above links or scroll down see all to the PlayStation 2 cheats we have available for Viewtiful Joe. 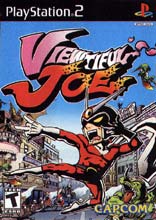 You can't just hit missles back at enemies in slow motion. You can be in normal motion and hit missles. To do that, jump in the air and kick or punch the missle.

Defeating The Boss With The Ship Steering Wheel

You will fact this opponent in Episode 4. You directly up to him. When he raises his arms and jumps, use your Mach Speed. You will face the steering wheel. Quickly use Slow Motion or Mach Speed to hurt him.

Defeating The Boss With Guns

When you smash all of the axes, you will enter a door. Go through it and you will battle a Boss with guns. When he fires a shot, switch to slow motion and punch his bullets. Then, slow motion again and keep punching him.

Start by Mach Speeding him and he will defend with his axe. Two things may happen. He will either attack you or the axe will slip out of his hands, leaving him open for attack. If he charges at you, jump out of the way and run into the fire he left by for extra fire damage when you punch him. He should be dizzy from smacking his head on the wall, so you can attack him. Repeat those steps to defeat him.

After you land an attack on him, he will turn into many bats. Jump up and hit as many of the bats as you can. Each bat you hit will take some of his life away.

When you first face Gran Bruce, quickly use Mach Speed and go all the way down where Bruce recovers well first. He will try, and you need to use your Mach Speed and run up and down around that area. He will then get tired. Start kicking and punching him in Slow Motion or Mach Speed. He will then spit bombs out at you. Run around again. He will then accidentally eat one. Hit him, and it will take a lot of health from him. Keep doing this until you defeat him.

Destroy The Tank In Episode 5

When you encounter the tank at the start of the episode, your punches and kicks will not do much damage (not even in Slow Motion or Mach Speed). When it fires a large bullet at you, go into Slow Motion and punch the bullet back at the tank. It will not destroy it, but it will do damage to it.

When in part two of Episode 4 (The Viewtiful Escape), you will have to slow down time and hit some gears to stop them from moving. After that, there will be a straight away and enemies will pop up. One will contain a pink juice (infinite VFX power for a period of time). Some enemies will pop out. Start attacking them in slow motion. When a target comes on them, kick them. All the other enemies will get targets on them. Every time you hit one of them, you will get an extra 100 Viewtiful points.

When you go through everything in 2,000,000 Leagues Under The Sea you will face a jet. Drop bombs on its roof and deflect the missiles back at the jet to kill it faster.

Shooting Faster On Your Ship In Episode 3

When you first start Episode 3 (2,000,000 Leagues Under The Sea), you will start moving. Press R for Mach Speed and press A to shoot much faster.

When you first start the episode, go in slow motion and the water will get big. It will then fall on the switch. Then, run to get to the door. At the end of the second part of Episode 2, after you break the hole in the ceiling with the bombs, you will enter a room with three lasers, enemies, and a big bomb. Kill the enemies, then use turbo and keep hitting the bomb until you turn to fire. When you are on fire, you will light the fuse of the bomb. Hit it to the end of the room where the stone wall is located and let it explode. It may take two bombs to destroy it. Immediately before the end of the episode when you have to face King Charles the 3rd, there are four Statues. Use your Mach Speed and punch them to light them on fire. You will catch on fire and can punch the rest. You will get the key to enter the room to face the Boss.

Go to the options and enter the V-Gallery to find a trailer for P.N. 03.

Make a bomb and do not let go of it. Joe will begin kicking it with his foot, while whistling the first notes of the Super Mario Bros. theme. Also when you have V-Bombs, hold Kick to pull one out, then keep holding Kick and he will bounce the bomb and whistle the Mario song.

When you die, you will hear a voice that says "Cut! Cut! Cut!". Also when you pause the game during any episode, someone will say something.

When you use up all of your VFX power, you will turn back into regular Joe. When you are regular Joe, the screen will be slightly fuzzy, like a old movie.

Jump up to the chandeliers ceiling then press B and jump. You will hit a switch and it will knock down the other chandeliers within reach.

To do a very fast attack, go into Zoom mode and hold R (Mach Speed). Then, hold Kick and you will keep spinning, doing damage to everything that approaches. When you hold Punch, you will start punching very fast and start moving forward.

Sometimes, your Mach Speed, Slow Motion, or Zoom In power will have effects on items. If you are in Viewtiful mode and your Beam Watch is glowing a rainbow color, it indicates one of you VFX powers will have a effect on an item.

Use your Mach Speed and punch anything. You will get Viewtifuls that you can use in the store.

At the end of Episode 5 when you have to fight the boss (Alastor), Joe still does not know what he should call himself. Also, Alastor does not know Joe's name yet. However, in the FMV sequence before the fight, Alastor will read the script that tells about their plan, and the cover page is marked "Viewtiful Joe".

When you are fighting Gran Bruce (the Boss of the Episode 3), he will sometimes spit out garbage. In the garbage, you will see a Gamecube.

In Episode 2, you will see some billboards for topless bars. They have topless girls with black stars over the middle of their chest.

In the Episode 2, you will have to jump on a speeding bus then jump on a ramp and over a big gap. Before you go off the ramp, hold down L for slow motion. The bus will gain more speed and will get over the gap.

When you jump off of something and begin to fall, start punching and kicking. This will slow down your fall.

When you are fighting normal enemies, use your slow motion power and zoom in power at the same time. This will make your punches and kicks more powerful.

When you are on fire (not the Mach Speed fire), hold Mach Speed and it will go out quickly.

Send Missiles Back At Enemies

Sometimes, enemies will fire missiles at you. Go into Slow Motion and punch or kick the missiles. They will flash red, then go after the enemies.

Collect 50 film canisters to increase your VFX meter by one cell.

During an intermission sequence, press Z to advance past it.

We have no cheats or codes for Viewtiful Joe yet. If you have any unlockables please submit them.

We have no unlockables for Viewtiful Joe yet. If you have any unlockables please submit them.

We have no easter eggs for Viewtiful Joe yet. If you have any unlockables please submit them.

We have no glitches for Viewtiful Joe yet. If you have any unlockables please submit them.

We have no guides or FAQs for Viewtiful Joe yet. If you have any unlockables please submit them.

Submit a cheat for Viewtiful Joe