Use the above links or scroll down see all to the Xbox 360 cheats we have available for Batman: Arkham City. 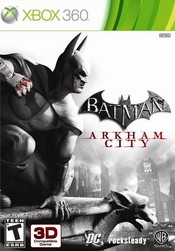 On the ship near the complete bridge (it goes between the Industrial District and Amusement Mile) there is a tiny raised area on it. Stop on this little platform and take out your Cryptographic Sequencer, you will start hacking something. This hack is very tough, but after you get it the trapdoor opens. When you go down you'll see several hundred bugs scurrying around and a dead henchman. If you zoom in on the henchman he will move a little bit. To the right of the henchman is a clipboard with Dr. J Crane's name on it, and an order for several thousand of those bugs.

Open up your Cryptographic Sequencer and you can find three broadcasts from a slightly fuzzy and robotic voice. It will keep saying mostly random numbers. These numbers are actually a cipher, numeric representations of the alphabet. Two of the broadcasts are garbage, but the third one says: "9 23 9 12 12 18 5 20 21 18 14 2 1 20 13 1 14" which translates to " I WILL RETURN BATMAN". See if you can figure out any of the others.

Clayface Is Not Dead.

At the last cutscene you see the joker dies and clayface is dead. Or is he. If you look closely clayface falls into the lazuris pit and that means he is as powerfull as ras al gul.

1: This question can only be answered from an unusual perspective. Can you get yourself there?

- drop down beneath the platform you enter the torture chamber on from the east. Stand to the right of the water cooling chamber and use detective vision to align the Riddler mark  on the distant wall opposite.

2: Who’s in control here? The puppet or the puppeteer?

- in the northwest corner of the trophy room is a display with the Scarface puppet. Scan this.

3: Was he framed? Or does it run in the family?

- in the corridor leading out of the trophy room, as it turns to head west look for a picture with two people and a young Penguin.

4: Have Joker's pets laughed themselves to death, or just eaten too much?

- in the corridor leading to the War Room, look for a display with a hyena inside.

- at the back of the War Room is a red poster with the Abramovici twins, scan it.

6: See no evil, hear no evil, speak no evil, or there will be explosive consequences.

- on the bottom floor of the Armory area, in the northwest corner is a display with three skeletons arranged to represent this riddle's phrase.

7: Can anyone TOP the Penguin when it comes to the full VIP treatment?

- in a small room connected to the bottom floor of the Iceberg Lounge, look for a top hat. You'll need to zoom in to successfully scan it.

To unlock the alternate ending for Arkham City, you must have the Catwoman DLC. In her third mission, when you have the option to go left or right with the "loot," head right for the alternate ending. Don't worry; you'll be able to "rewind" back and not ruin anything in the main game.

FREE New Costume And Use DLC Costumes BEFORE Completing Game

To unlock this, simply press the following combination on the Main Menu screen (after you have selected your save slot):
Left, Left, Down, Down, Left, Left, Right, Up, Up, Down.
(This should enable you to use all dlc costumes and have a new costume for free but the dlc costumes remain unusable unless you buy them).

Big Head Mode will work on all characters and skins, and is enabled on consoles by holding down both trigger buttons and twirling the analog sticks. Machinima maker Rooster Teeth released a video showing just how to make your Arkham adventures Cranially Enhanced. It only works on Normal, Hard and New Game Plus modes. Here's the video:

At the main menu, press Left (2), Down (2), Left (2), Right, Up (2), Down to unlock an option to select any of the bonus skins. If you entered the code correctly, you will hear a sound when you continue your game.

Beat the game once and you can unlock New Game+ mode. It lets you to play through the story on a harder difficulty with all of the tools you already acquired in your first game. Note that this will not prevent you from playing your original save as well -- the New Game+ is separate save.

Depending on the country, here's how you get special skins as a free pre-order bonus:
Animated Series Outfits
AU: Preorder at JB HiFi
NZ: Preorder at MightyApe
Batman Beyond

Comes with the Collector's Edition of Arkham City
Earth One

Buy a Copy of Green Lantern on Blu-ray from Best Buy.
Red Robin

The boat this easter egg is located on is on the eastern side of Arkham City between Industrial Amusement Mile. LAND ON THE BOAT, Batman can not swim. On one side of the boat you should see a hatch that looks like a square, stand on it, pull out your cryptographic sequencer, and you should start hacking something. The code for it is CITY OF TERROR on the sequencer.

We have no glitches for Batman: Arkham City yet. If you have any unlockables please submit them.