Use the above links or scroll down see all to the GameCube cheats we have available for Eternal Darkness: Sanity's Requiem. 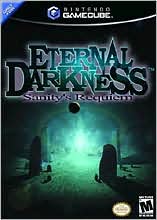 How To Open The Bookcace

For those pesky times (or really whenever) when your weapon only seems to load one round @ a time, try this. When you press the reload button, keep pressing it over and over and your weapon will reload every round until it's full.

If you have a torch and you are face a large group of zombies, swing the torch at them. They will die in one hit. You will have to do a final blow quickly because they will disappear if you are too slow. Note: This will only work on the normal common zombies.

When playing as Dr. Lindsey, find the two Runes for Summon and Creature. One is found in a zombie on the staircase down on the last floor and another is on the last floor in some cobwebs. Use your archeological brush to uncover it. Combine these two runes together to make the Summon Trapper spell. Go back up to the floor with the gold statue and find your way to the machinery that was uncovered when you dispelled all the magick fields. When you examine it, you will learn that there is a hole small enough for a small dog to walk through. Summon a Trapper to walk through the hole. Inside will be a bridge with two Horrors on each side. Walk past them and onto a switch with a purple Rune on it. Press A to kill the Trapper and take control of Lindsey again. The switch will have opened a door behind you, where the Mantorok Rune is located.

Use the Reveal Invisible spell with the Mantorok Rune to make your character invisible.

Successfully complete the game three times using your same saved game data when starting a new game each time to view a special ending movie the third time the game is completed.

Beat the game twice to unlock the "jump to game" option.

We have no cheats or codes for Eternal Darkness: Sanity's Requiem yet. If you have any unlockables please submit them.

We have no unlockables for Eternal Darkness: Sanity's Requiem yet. If you have any unlockables please submit them.

We have no easter eggs for Eternal Darkness: Sanity's Requiem yet. If you have any unlockables please submit them.

We have no glitches for Eternal Darkness: Sanity's Requiem yet. If you have any unlockables please submit them.

Walk Through Part 1 (Up to Anthony.)