Need for Speed: Most Wanted cheats & more for GameCube (GameCube)

Get the latest Need for Speed: Most Wanted cheats, codes, unlockables, hints, Easter eggs, glitches, tips, tricks, hacks, downloads, hints, guides, FAQs, walkthroughs, and more for GameCube (GameCube). CheatCodes.com has all you need to win every game you play!

Use the above links or scroll down see all to the GameCube cheats we have available for Need for Speed: Most Wanted. 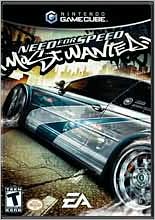 If you keep your starter car and fully upgrade it with all of the performance parts and markers, by the end of the game your car will be really fast. My cobalt can do over 230 mph.

If you win Webster's pinkslip in his boss-race, KEEP HIS CAR! For performance, finish putting everything ultimate, and do what you want with the visual and parts. You can beat the rest of the game with his car.

How To Make A Custom BMW M3 GTR

To do this, you first must beat the Blacklist, then escape the final pursuit (mainly complete carrer mode), and then do this. Don't sell the BMW M3 GTR! You need it to do this! If you have it (hopefully), select it at the safe house and then go to free roam. Drive straight to the (body, visual, and performance)shop. Now go into it. Though, you can only change the visual (paint, vinyls, decals, etc. ) . Customize the visual any way you want it. That is how you do it.

Turn With Speedbreaker Without To Much Of A Slowdown

When going into a turn release the R button and press up on the C stick. After you have gone into the speedbreaker mode press down on the R button all the way but make sure that after the turn you press up on the C stick again and exit the speedbreaker mode, but if you have any NOS left before the turn DON'T USE IT UNTIL YOU HAVE COMPLETELY TURNED so if you did lose some speed you can gain some back.

Remember to shift when the light turns green or your engine blows. Do this by pressing the Y Button. And remember, dont hit traffic or your car will be totaled! Nitrous is very useful too, so use it to your advantage.

Do Better In Races For Free!

On the pause menu, go to Performance Tuning Remember to maximize your steering and handling. It is always better to have Maximum control of your ride.

If you find yourself spinning in a circle uncontrolibly, don't hit the brakes or turn the other way. Just simply let go of the gas and you will stop.

Everyone keeps on asking: what is past the blocked off area just south-west of Higgly Feild. Its a broken bridge that you use to evade a police pursuit after you beat Razor.

A few feet before you reach the speed trap camera, press your turbo button, and this will boost youre speed tremendosly.

Find an easy race such as a drag or something short that you can win quickly. Win the race and get the money. Go back to the safe house and start the race again. Win the race to get the same amount of money again. Repeat this process as much as desired. This is quite useful when you need that extra bit of power to defeat a Blacklist Rival, but don't have the money for a better car or parts. Defeat one of the opponents on the blacklist. You will get two marks to use on several different things. Do not use them on the Uniques early in the game. Instead, use them on the middle or the left "Random" choices. They should usually come out to either a large cash bonus or the opponent's pink slip.

Get a perfect launch on your tachometer when launching from the start line to get a boost. When the needle turns blue drop the clutch and hold on.

When your going at a top speed on a race or on a cop chase and you are about to make a very sharp turn, turn and then hit your NOS (B button) and you'll straighten out. You'll be surprised at how fast you straightened out. Use with Speedbreaker and you'll be able to roar around any corner.

If you have a saved game file from Need For Speed:Underground 2 on your memory card, you'll get an extra $10,000 in Creer mode.

If you beat this you get all the Junkman performance parts.

To win the following cars defeat the indicated Blacklist Boss

At the start screen press up, down, up, L[2] to unlock the Porsche Carrera GT.

At the Start Screen, press UP(2), DOWN(2), LEFT, RIGHT, UP, DOWN to unlock a special marker for the Junkman Engine part in theback room of the One Stop Shop in Career mode. Note: This code can only be enabled once per career.

We have no unlockables for Need for Speed: Most Wanted yet. If you have any unlockables please submit them.

We have no easter eggs for Need for Speed: Most Wanted yet. If you have any unlockables please submit them.

We have no glitches for Need for Speed: Most Wanted yet. If you have any unlockables please submit them.

Submit a cheat for Need for Speed: Most Wanted