Use the above links or scroll down see all to the GameCube cheats we have available for Shadow the Hedgehog. 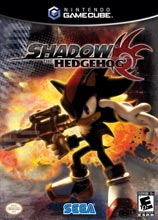 How To Be Hyper Shadow!!!

In order to turn into Hyper Shadow you first need to complete all the endings for all the stories. This includes the good and evil storylines. Once you do this, you will unlock the Last Story. Choose the Last Story and you will begin a level called The Last Way after some intermission sequences. Once you complete this and reach Black Doom, there will be an intermission sequence, at the end of which Shadow takes the Chaos Emeralds and turns into Hyper Shadow.

Shadow Vs. Sonic And A Robot

To vs. Sonic in story mode, complete all of story mode in Hero Missions except for the Final Haunt. Sonic will ask why you betrayed him. You and Black Doom's Eye will take on Sonic. When you hurt Sonic, the robot will use a laser beam. This is your chance to attack him! But, the problem is this, you only have two weapons.

First, you need to choose when to freeze the screen. When you are ready, pause the game. Then press and hold A, X, or start. To unfreeze, just let go of the button.

How To Find Cheese In Criptic Castle.

When you get to the room with all the chaos you have to find a spring. Jump on it and you'll land on a platform with torches. Brake one of them and take it to the big thing in the middle of the room and light it. Then a door will open and Cheese is behind it.

In Cryptic Castle you gotta find cheese the chao at one part after you find cream. When you get to the room filled with chao, none of them are cheese. Go to one of the porch walls and on a certain wall, a secret door will open when you go to it. Keep following it and cheese will come out!

The Shadow Rifle is the most powerful weapon in the game, so for a lot (and I mean A LOT) of enemies you shoot them with it, they mostly die.

When you are using Dark Shadow Missions, DO NOT, I repeat, DO NOT shoot the aliens. DO NOT pass over anything that the good guys want you to get. This game is all about respect and you dont wannna get shot by the aliens if your Dark Shadow. Capeesh?

There are 5 keys hidden in each stage of the game. If you collect them all, you will you'll unlock a secret door that leads to a special surprise.

The last level in the all Hero storyline is extremely tough to get through. To get to the goal, you have to go through the level without hitting ANY switches.

In Expert mode, you must go through all of the levels one at a time without a break or mission, and on a harder difficulty. You are given five lives, any lives you pick up, but cannot continue. If you lose all your lives, you must start all the way back on the first level. However, if you find yourself in a dangerous position (for example, falling off a cliff), press Start before the game registers the loss of the life, then select "Quit". At the Expert mode menu, select "Resume". You will start at the beginning of the level you were on, but you will not lose that life and will resume with the total lives you had previously.

Go to the stage were you have to kill the Chaos. There is a room near two GUN soldiers and a Chaos that has two weapon boxes in it. Break both boxes, then go in the room with the GUN soldiers. Go back and the boxes will be there again. You can repeat this as many times as desired.

In most stages you have three choices: to help the Dark side, yourself, or the Hero side whenever you have someone with you and it is not a Boss fight. To change the character you want with you, press Start. There will most likely be three selections: Dark, Neutral, and Hero. Press Left or Right to highlight a character or ring in the middle. Press X to select the highlighted character. That character will remain with you until your next run in with the other character. You can then simply press Start and do the process again. Note: You cannot select a Hero partner if there is an "X" over the Hero side. You cannot select a Dark partner if there is an "X" over the Dark side. You can also use the D- Pad to change your partner. Press Right for the Hero character, Left for the Dark character, and Down for the Neutral character.

Use controller two to play as the Hero characters, such as Sonic, Tails, Knuckles, etc. This also works with Maria, but does not work with Doom's Eye. Note: They cannot pick up guns.

Collect all five hidden keys in the indicated level to unlock the corresponding bonus behind the five-keyed doors:

Successfully complete the Dark storyline to unlock the Never Turn Back song.

Successfully complete the Semi Hero storyline to unlock the Chosen One song.

All Of Me Song (full Version)

Successfully complete the Last Story to unlock the All Of Me song (full version).

Successfully complete the Hero storyline to unlock the All Hail Shadow song.

Successfully complete both the Hero and Dark versions of a storyline to unlock the Level 2 weapons.

Successfully complete the Dark storyline to unlock the Samurai Blade.

Successfully complete the Hero storyline to unlock the Heal Cannon.

Successfully complete the Last Story to unlock the Shadow Rifle.

Successfully complete every sixth stage in Story mode, defeat all Bosses at the end (all five Hero and all five Dark Bosses), and see all ten Hero and Dark story line endings to unlock the Last Story.

Get an "A" rank in all stages to unlock Expert mode.

Press Start to pause game play, then hold B (for xbox). (hold X for PS2 and Gamecube).

Get "A" ranks in all stages in the game.

Successfully complete every sixth stage in story mode, defeat all Bosses at the end (all five Hero and all five Dark Bosses), and see all ten Hero and Dark story line endings.

Complete the last story to unlock the Shadow Rifle.

You have to get to a turret and shoot at him wildly. When he gets halfway down, he will say "All right, you asked for it!" and will jump down off the platform. You keep shooting at him. When he destoys the turret, get a gun from a pawn and shoot at him until he dies!!

How To Beat Egg Dealer

To beat egg dealer you need to chase him around the stage untill the slots are facing you. Jump up in the air, when shadow starts to do his flip do a homing attack shadow will be chasing the egg dealer through the air untill he hits the button to stop the reel. When two of the reels are on rocket or bomb stop the third reel on rocket or bomb to make the egg dealer malfunction and attack egg man. Also egg man will stop a reel on his own from time to time. (note that if the reels land on three pictures of shadow's head shadow will be able to use his chaos blast.)

Complete story mode on the neutral story (either good or bad) to unlock the Vaccum Egg gun. The Vaccum Egg sucks up in range targets and destroy them, very useful on Westopoils.

We have no glitches for Shadow the Hedgehog yet. If you have any unlockables please submit them.

Submit a cheat for Shadow the Hedgehog