Use the above links or scroll down see all to the GameCube cheats we have available for Star Fox Assault. 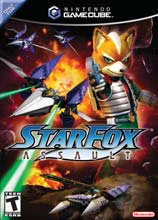 Unlock Wolfen In Vs. Mode

Sometimes during the game, you'll have help from other people, not just your teammates. On the first mission, in the very beginning, if you look into the background, you'll see one of the battleships you can kill. If your lucky, you'll see one of the good warships blast it with a bunch of blue lasers. Then, on the level with the big gate, you'll see some random guys flying around helping you. Finally, on the Corneria mission, you'll notice the green soldiers betray you and attack. Some of them are still good, and wont attack, unless you attack them.

As soon as you start flying on the planet you fly for a little bit and falco will ask for you to get the enemy behind him. Don't go just yet. You will see a tree branch sticking out shoot it and you will find a flag.

Unlock Wolf O'Donnell For Vs. Mode

To Unlock Wolf, beat all 10 missions, and don't let any of the Starfox Team members retire during the missions.

Get The Sensor Rocket

To get the Sensor Rocket you will need to complete 170 vs battles.

Get The Stage Zoness Sea Base

To get the stage Zoness Sea Base you need to complete 130 vs mode battles.

Get The Demon Sniper In VS Mode

To get the Demon Sniper you will need to collect all 50 Special Flags in 1 Player mode.

Unlock Crown Capture In VS. Mode

How To See Character Abilities On Vs Mode

Press X to see the character abilities (Slippy Five Star in Landmasters, and stuff like that).

Ride On The Wing Of An Arwing In Vs. Mode

Gattling Guns In Vs. Mode

Get all silver medals to unlock the Xevious mini-game.

Unlock Planet Sauria In Vs. Mode

Unlock Peppy Hare In Vs. Mode

To unlock Survivor mode for Single player, complete the game once.

Unlock Wolf O'Donnell For Vs. Mode

To unlock Wolf, beat all 10 missions, and without letting any of the other Star Fox Team members retire during the missions.

We have no cheats or codes for Star Fox Assault yet. If you have any unlockables please submit them.

Do 75 multi player battles is Vs. mode.

We have no easter eggs for Star Fox Assault yet. If you have any unlockables please submit them.

We have no glitches for Star Fox Assault yet. If you have any unlockables please submit them.

How to Defeat all the bosses