Use the above links or scroll down see all to the GameCube cheats we have available for Star Wars: The Clone Wars. 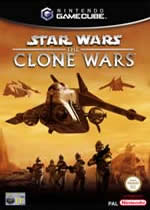 use the cheat for wookie in acadamy then play as him and you will get tons of points{try to beat my high 8535 good luck!}

Get Far In Thule Moon Academy

Start Thule Moon Academy w/the AT-XT assault walker. When it starts, go to the cave where the super blasters are, but DO NOT GET THEM!! (Save for absolute emergencies!) Wait for the enemies to gather at the entrance. Then, turn on your sheild and use a combined laser and morter attack to whipe them out. (This also works w/ the fighter tank, but is not nearly as effective.)

Kill Em' All In Geonosis Academy

Start Geonosis Academy w/the super battle droid. Immediatly go to one of the walls in between the entrances. Hold Y button while shooting, your aim will be much better! This also comes in handy for dual mode!

To unlock Yoda in Genosis Academy you have to get 45 bonus points by doing it the hard way or put in ''YUB YUB'' for each mission.

When you beat the last Raxus Prime level, Conquest of Raxus Prime, and you are fighting the Potodeka you can go behind the excavation crane where you are out of sight of the Protodeka and after a while the Potodeka will begin firing on the crane then, BOOM! The crane will explode in a cloud of debris and dust like the core ships do.

Enter "CHOSEN1" as a passcode.

To get three bonus points for free, select a level, fire a few lasers, then quit. Go to the codes screen in the options menu. Type in YUB YUB at the codes screen. You can do this on every level. NOTE: there is a space between Yub and Yub.

type in GASMASK as a code. NOTE: this will not work if you write GAS MASK.

To Use the clone trooper, type in "FAKE FETT" on the codes option. THIS DOES WORK!!!!!!!!! Just remember to put a space between FAKE and FETT.

In cheat code area, type in CORDE as a passcode.

At the enter code screen type in "1WITHFORCE" If you did it right it will say You have unlocked Invincibilty at the bottom.

Enter "FUZZBALL" as a passcode.

Enter "SAYCHEESE" as a passcode.

Enter "ROGERROGER" as a passcode.

Enter "CINEMA" as a passcode.

Enter "FRAGFIESTA" as a passcode.

We have no unlockables for Star Wars: The Clone Wars yet. If you have any unlockables please submit them.

We have no easter eggs for Star Wars: The Clone Wars yet. If you have any unlockables please submit them.

We have no glitches for Star Wars: The Clone Wars yet. If you have any unlockables please submit them.

Guide to Beating the Bosses v.2

Submit a cheat for Star Wars: The Clone Wars