Use the above links or scroll down see all to the GameCube cheats we have available for James Bond 007: NightFire. 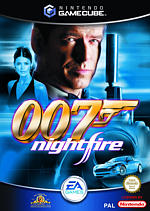 There is another version of the kowloon it is the kowloon type 80! The only way you can get it is if in multiplayer you put in a random gun set and after a while it will appear and it looks exactly like the K-40 but it has automatic fire!

Choses multi-player mode and for weapons select phoenix weapons. You will start out with a k-40. fine another and u can use two k-40 though you can only shot one at a time and can only keep it in semi. NOTE: you also must be a phoneix charecter.

In multiplayer, be the MI6 team and use the skyrail to get to the other flag. Have a strong gun and take it. then jump onto the higher roof and go to the front edge. Grapple onto the other building, you're home free if a teammate is guarding the flag. (works better with bots)

When you get to the part where you have to destroy the helicopter on The Exchange don't worry about missing with the sentinal. The game will say picked up 4/3/2/1 rockets every time you reload.

When you get onto the robotic forklift on Chain Reaction turn on the forklift. By the entrance of were you get in to turn on the forlift you will see a part were there is no fence. Jump onto the ledge. Go to the end of the ledge and there is a ladder. Climb up it. When you have finished going up the ladder you will see a pipe. Go to the top of the pipe and then press A. The screen will go to third person view. Use the C-stick to get to the end. Then you can go into the window. (There is another enemy on the roof).

If you look to your left in the elevator on Phoenix Fire you will see a gap you can go out of. Jump onto the ledge that is closest to you. There will be a grapple signal. Then grapple onto the top of the elevater. Go in the vent and go until you get to the end. In the room you enter there will be a grenade launcher.(You will get a bond move).

To defeat the ninjas on Coundown really easily all you have to do is this. Save all your tripmines for the ninjas. Then after you defeat all the enemies after the first rocket blast off, put tripmines on the 2 things in front of the fireproof bunker you are going into. Make sure there is tripmine facing horizontal. Stay in the fireproof bunker because the ninja will run strait into them if you stay inside. (Make sure you put a lot of tripmines there).

When you get to the compound on Island Infiltration don't break through the gate. Instead go slowly to the gate or stop near the gate. It will open up. Then go in. DO NOT shoot. DO NOT crash into any poles, enemies or the gate. If you do the enemies will start attacking. When you go out, the gate will NOT open so you have to crash through it.

On any level where you are in a vehicle (helicopter, snowmobile, ultralight, SUV or car, NOT the sub), pause the game, hold down L and push X(4). Release L and unpause the game. Your gun will turn into a grenade launcher.

On your way to the TR2 building, when you get to the last rope that you need to climb in order to get into TR2, take out your grapple and look up. You will see a grapple hook, grapple to it and you will be on top of the TR2 building. Look at the line connecting the TR2 building and the hanger, you will need to shoot a soldier in the hanger, than repel down the line into the hanger. On the ledge you will find a Delta Repeater at the end of the ledge.

When you get out of the IST1 building, turn left and walk towards a hanger. When you get to the hanger, there is a grapple hook that will allow you to get up on the ledge. The only way to reach the grapple hook, is to stand on the box directly below it. Once up on the ledge, walk towards the body armour, when you get to the body armour turn left and you will see a tanker in the middle of the hanger. Jump on top of the tanker, there is a locked grate, use you laser to break the lock. You will drop into the tanker and you will find a Phoenix Ronin inside.

You need a sniper to do this code. In the level Ravine when you come to life and your on the top part go to the path that goes up. Then you can get the sniper on the ledge. Then sniper the enemy. Have fun sniping!

Some guns will have a second power. All you have to do is hit "B"

You know on the top of the base at the bottom of the hill on Skyrail? If you go to the top you will see a roof barely above the ground. Use "jump" to hop on the roof. Then you will see the place where the snow lift exits the building, be alined with the wire and start walking on it. You can walk over the hill to the other building and shoot people from the wire. If you are walking on the wires and people are shooting you,hop on the pillars that are holding the wires, and it's like a base where no one can get to.

On the level Pheonix Fire, get the Ronin and turn left. Go to the window, a helicopter will try to shoot the crap out of you. Put the Ronin next to the window and run away. In a minute or two, you will get an award(for shooting down the helicopter). BUT!! There is a civilan near the window! don't put the Ronin in range of her!

In the multiplayer level SkyRail, if you want to be the sniping king, do this. Go to the lower level building that is NOT stone. Then run to the top and jump on the roof above the entryway(above the deck where you first come in). If you look toward the side of the house where the sky rail comes out. Where the side of the roof meets the ground, there is a gap. You can hide there and have a clear view to snipe and not be seen. Works best on "Top Agent" scenario.

Why waste time pumping your shotgun when you can just alt. fire on it and make it auto.

Whenever a missile gets parpared to launch, there is a green circle of lights, shoot the inside of the green circle 3 times to criple the missile or until the green lights turn red. NOTE: Every time a missile parpares to launch more enimes come out of the ship. And when Drake comes out of the ship, hurry up and kill him because he has a rocket launcher and shoots fast and powerful. Even in Operative

Enter "PASSPORT" as a code to unlock all levels.

To get the demolition mode in multi-player, enter "TNT".

All Skins In Multiplayer Mode

Go to the SECRET UNLOCKS section & enter PARTY. Then go to multiplayer and check it out.

Drive A SUV On Enemies Vanquished

Pause the game on Enimies Vanquished level and hold L and press B, X, Y, B, Y, then release L.

On the "Enemies Vanquished" level, pause the game, Hole L and press X(2), B(2), Y. Release L and you will be taken to a level where you race a Phoenix car (don't worry, it won't shoot) through the "Enemies Vanquished" course. No one can shoot (not even you), but you can force your opponent into the path of other cars in the other lane to gain a lot of ground on him. When you reach the rendez-vous point, you will be told who won.

On a vehicle level, pause the game, hold down L and press X, Y, B, X(4). Release L and your health meter will show that you have armor.

Put in the code LAUNCH

Put in the code VACUUM

Put in the code PHOTON

Put in the code BLASTOFF

Put in the code PARTY

Put in the code TARGET

Put in the code MELTDOWN

Enter "TEAMWORK" as a code.

Enter "SCOPE" as a code.

Enter "Orbit" as a code.

Enter "GUARDIAN" as a code.

Enter "TRANSMIT" as a code.

We have no unlockables for James Bond 007: NightFire yet. If you have any unlockables please submit them.

We have no easter eggs for James Bond 007: NightFire yet. If you have any unlockables please submit them.

We have no glitches for James Bond 007: NightFire yet. If you have any unlockables please submit them.