Use the above links or scroll down see all to the GameCube cheats we have available for Resident Evil. 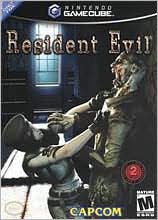 Obviously ammo supply can be an issue so here are the guns, ammo and priority of which to ones to conserve: The Magnum Revolver is number one top priority. There are only a few places you'll find ammo for it like the aqua ring in the residence area and the 2nd floor of the mansion. You'll find that when you need to find the battery for the courtyard elevator inside the room with the battery. The Shotgun would be tied with the Incendiary (Flame) Rounds for the Grenade Launcher, you only find 2 or 3 of those so save them for when you need them. The Shotgun on the other hand, you find a decent amount of ammo for it throughout the game, especially as Chris. The last would be the Handgun. You find ammo for that all the time. And as for the Survival Knife, its pretty useless for the most part but keep it on you if you're running out of ammo. But Ammo isn't the only thing you should conserve, Medical supplies are also something you should try to Conserve as well. Mix as many herbs as you can, Green+Red+Blue, Green+Red, Green+Blue, Green+Green+Blue, Green+Green, Green+Green+Green, all sorts. Also try to conserve First Aid Sprays, those will help. I recommend trying it on easy first to get a feel for it and to learn the locations and enemies so good luck and have fun.

Once the first zombie of the game is dead, go to Kenneth and push A. You'll get his film which will be considered a file, not an item. After a long adventure of survival horror, and your in the lab, you need to go into the small room where you find the Laboratory Key. In there is a video player. Go to it and push A. Select yes to see his film.

Headshots With A Shotgun

If you point your shotgun up on a zombie's head, you will always do a headshot.

Here are some tips that might help you get the infinite rocket launcher (beat game under 3 hours):
1. Dodge zombies you can dodge.
2. Do the grenade glitch.
3. Go for the bad ending.
4. When not killing enemies, unequip your weapon (NOTE: This makes your character go faster)
5. Play as Jill and on either normal or hard difficulty.
6. Dont save that much.
7. Do a speed run.
8. Pausing, checking inventory, checking item box, and cutscenes all count as time.
9. Dont examine keys cause its just a waste of time!
Now that you know everything! Are you ready to beat the game in under 3 hours?.

Weapon List, Ammo And Other Items For Jill And Chris

So thats that now let me explain a few things Jill has a Lock-Pick therefore she gets around a lot easier, but chris has to find Old keys which replace Items such as ammo, ink ribbons etc. , which flat out stinks, I mean come on you can never have TOO many of one thing. And as for other ammo, all Grenade/Incendiary/Acid Rounds as Jill will be changed to Shotgun Shells as Chris and about half of the Shotgun Shells as will be Grenade Rounds as Jill. And every Battery found as Jill will be a Flash Grenade for Chris. Other than those things the rest of the items that are necessary to progress further through the game are the same so good luck and have fun.

Beat Hard Mode with either Chris or Jill and then it will say you can now play on Real Survival Mode. Basically there was a prototype for the original Resident Evil game that would make the aiming of your weapons automatically set on Manual and all of the Item Boxes weren't linked. It was never released but the makers of this version decided to add it as a harder level. So now you have to manually aim and remember all Item Boxes are not linked to each other.

Preventing Zombies From Coming Back To Life

If you shoot a zombie and he falls down he may not be dead. The following are indicaters and tips that help you determine weather a zombie is dead or alive. If you run from a zombie that you knocked down that is still alive once you enter the room again that zombie will be faster and be more brutal, so if you start killing a zombie you'd better finish the job there because it will cost you later on.
1) If you see a pool of blood under the zombie they are dead, you shot them enough times.
2) If you use a flash grenade as a defense item against a zombie they will die instantly.
3) If you shoot the zombie's head off they will not come back.
4) You can use your Fuel Canteen and when the zombie is laying on the ground you can burn them.

To save kerosene all you have to do is kill a zombie till it falls on another zombie to make a stack then light sack with kerosene then you kill two or more zombies while saving kerosene.

Doing the V-Jolt for Chris is a sacrifice of the Assault Shotgun. Once you get the Armor key, go into the room with Richard. When you are told to get the serum, don't. Keep doing things until you need to get the last Death Mask. You'll need to go past Richard. He should be dead by now. Now, you won't get the Assault Shotgun in the area of the sharks. Once you get to Plant 42 in Residence, you'll see a cutscene featuring Chris and Rebecca. Go into the room with the jars and get the V-Jolt. Bring it down to it's roots in Residence B1. You still have to fight Plant 42 with Chris, but it's alot weaker.

To save Chris or Jill, (You don't have to, this is just if you want the "Good" or "Best" ending) you must get three MO disks. To get them, you must do these simple steps-

The easiest way to beat the Tyrant can only be done with Jill. First of all, get the first MO disk. Then, when your in the area where you find Lisa (the mutated girl in chains) for the third time, don't give Barry his gun. You'll see Barry die. Keep doing the MO disks part to save Chris. When you get to the Tyrant for the first time, use one bullet on the Tyrant to bring him down. (WOW) When you do, go to the end of the room and unlock the door. When you do, there's something else in the room. Get Wesker's key or you won't be able to get to the room ahead of this area. Go to the three switches and unlock the door. Go down the stairs to get Chris, go to the beginning room of the lab, (With the ladder, the Item box and the Type Writer) and go up the ladder. Keep going and get the fuse pack and put it into where it is missing. Go up the elevator and use the flare kit. Oh, just remember, when Wesker got hit, he injected himself with the T-Virus, giving him super human strength and speed...

Run in circles, dodging it's poison,& occasionally stopping to shoot it. When it charges you, you'll get hit, but it won't deplete much helth.Get the knife out & cut through the webs on the door to the right.

This is the ultimate herb.It cures 100% of your health and cures posion too.

This will cure 125% of your health but you shouldn't do this becuase you only have 100% of health.

This will cure 50% of your health and cure posion.

This will cure cure 25% of your health and cure posion.

This will cure 50% of your health.

This herb dosn't do anything without another herb helping it.

A green herb will heal 25% of your charecters health.

Once you obtain the Gernade Launcher and another set of ammo (Flame/Acid) goto the nearest Item Box and follow these easy steps:

The Gernade Launcher should still be in your inventory with 20 rounds. Exit the Item Box and check your inventory and it should read 240 now. To get 240 of other ammo, just swap the 240 rounds with another type and repeat all steps.

Successfully complete the game in "Invisible Enemy" mode with a time less than five hours to unlock a "Special Features" option that displays a message from the game developers and a gallery of pre-production costumes.

Successfully complete the game with both Jill and Chris once to unlock the "One Dangerous Zombie" option.

Successfully complete the game two times with Jill or Chris to unlock the "Invisible Enemy" option. All enemies will be transparent in this mode.

Successfully complete the game in "Once Again" mode on the normal difficulty setting with a time less than five hours. This unlocks the "Real Survivor" option (item boxes do not transfer items to each other), the .40 Smith and Wesson gun with infinite ammunition (replaces the combat knife in a new game), and bonus costumes. Additionally, the aiming system will be manual. If the game was completed using Jill, the bonus costume will be her outfit from Resident Evil 3.

Successfully complete the game with Jill or Chris with a time less than three hours. Save the game at the end, then start a new game to begin with the Rocket Launcher with infinite ammunition.

Successfully complete the game with Jill or Chris with a time less than five hours. Save the game at the end, then start a new game to begin with the Samurai Edge weapon.

Successfully complete the game with Jill or Chris and save the game. A new background will appear on the main menu. Select the "Once Again" option when playing your completed saved game. You may now choose new difficulty settings for the replay. You will also get a key that will allow the character that completed the game to have a new costume. Enter the room with the large mirror on the second floor of the mansion. Unlock the door in the back. Enter the closet and move all the way to the end of the rack of clothes. A message asking "There is an outfit that fits you perfectly, do you want to put it on?" will appear. Select "Yes" to change your character's clothes. Complete the game again to unlock a second costume.

In the laboratory, in the login computer type in MOLE instead of CELL (real password) and you will hear the voice of Tafu from Resident Evil 2.

We have no unlockables for Resident Evil yet. If you have any unlockables please submit them.

We have no easter eggs for Resident Evil yet. If you have any unlockables please submit them.

We have no glitches for Resident Evil yet. If you have any unlockables please submit them.

Created by: The Christo. Read the full guide...

Save Rebecca (Chris) / Save Barry (Jill)

Submit a cheat for Resident Evil