Use the above links or scroll down see all to the Nintendo DS cheats we have available for The Legend of Zelda: Phantom Hourglass. 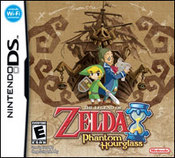 The first time you enter the ghost ship (thats after you find all three spirits) go inside and talk to a girl in red. She will ask you to find her three sisters. One of them will tell you to pick the treasure chest on the left( the two treasure chests are nearby in a safe zone)She will ask you do you know which is left. Answer her, but don't pick the one on the left. A rupoor is in ther and another reapling will appear. Only choose the one on the right. The one on the right ONLY, okay.

First go to Mercay Island then talk to the guy in yellow near the treasure teller. He asks you if you heard of the chief of frogs. After he asks, press no then he'll give you something special. That special thing is a treasure map.

On Mercay's Island, all you got to do is slash a chicken 5 times if you corner it. It will turn red, and like 20 other chickens attack you. Be careful, as this is only a simple trick I thought was funny. The chickens do hurt you severely when they attack you. Especially the red one. See if you can dodge all the chickens, outrun the red chicken, and count them all! Just kidding. You can try though.

Collect the three pure minerals, then take them to Zauz (he is on Zauz's Island on the north of the northwest map). He will forge a blade for you. Now exit and battle Jolene once more then go back to get the Phantom blade. Now take the blade to Oshus to have him finish the rest. You will now have the Phantom Sword.

When your in any of the maps (besides the south western one)Go to a ship where there is usually tresure left behind after you destroy it. DON'T destroy it, in fact try to get as close to it as possible without dying. Linebeck will then say " Bah, ambush! "Then defeat all the monsters after you talk to Linebeck (Who is hiding in a box). Then talk to him again and you should have COURAGE GEM! (NOTE:You get money after that, but the more you do it the less you get).

To get the Stun Shield, collect 10 wisdom gems and power up the spirit of wisdom. Now, you should be able to stun SOME enemies when they run into your shield. But not all enemies!

You know how you always want a golden ship that a friend has but he/she wont tell you how? I'll tell you. First way:Beetle shop ship and masked shop ship both will sell golden items every once in a while (Masked may also sell heart containers too). Or if you want to get 1 piece for FREE you have to make 4 BIG PLAYS in battle mode, go to cannon island after getting a note in the mail, go to the garage where the apprentice is and talk to him. Then a chest will appear giving you either a golden chimney or another golden item. Or every once in a while after beating up the LINK FAN for about 200 hits he might give you a golden OR normal ship part. Other then that check all shops you visit and see which will get golden for you! (p. s . The golden ship has the highest amount of hearts so it's great for the ghost ship battle before the end of the game).

If you spin attack 4 times he will get dizzy. ( you can only do this if you have the sword).

After you get the cannon for Linebeck`s ship Ride around looking for seagulls. Once you find some try shooting them with the cannon. It`s really fun!

Tell If You've Caught It Before

When you have the fishing rod and you are doing the little game, this is how you tell if you've caught the fish before. When the fish jumps up and it tells you to let go, look at the fish when its in the air. If its a fish you have you've caught it.

Ok, there are three rocks in the shape of a triangle below Molida island, go there. There is a spring where you're supposed to bring your spirit gems. When you have 10 spirit gems you can upgrade a spirit (depending on which gem it is). The spirit of power will upgrade your attack power, wisdom will improve your shield, and courage will let you use the beam attack. Once you get 20 gems you can upgrade your spirits even further.

We all know the hazards in the sea, right? Instead of going through jumping while your menu is open for fishing or scavenging, or whatever, just shoot both ends of the Hazard with the cannon. Then it will just collapse, and you won't have jump it anymore. Easier than jumping to me.

Ever day you play go to the shop. There is always something new there.

Attack Of The Evil Chickens

Keep hitting a chicken until it gets red. All the red chickens will start chasing you.

This power gem is not in a treasure chest. When you beat the game go to the bar on Mercay Island. Talk to the owner. He will give you a power gem to you.

Make small circles on the side of the screen.

This fish can only be found on a Rusty swordfish. (I got mine on a swordfish that is 13 feet)

The Big Tree And The Big Green Rupee

When you talk to a guy located left of Oshus' house, he wants you to clear the rocks out of his yard. Clear them out and he will give you one rupee. Then he will ask you if you want a hint. Say yes. He will tell you about a big tree. A dotted white outline of it will come out on the map. Press down to access your map and circle the spot. Later when you have Oshus' sword go over to the tree and scribble circles on the very edge of your screen. Link will do a summersalt into the tree and a big green rupee will come out. It is worth 100 rupees!

If you go northwest to the travelers ship and hit him more than 200 times he will give you a ship part.

The Old Wayfarer which is located in Bannan Island in the northwest sea. He is a old coconut and has buried treasure. Go dig in front of his house and you'll find a treasure map. I got 1 minute of sand for my hourglass.

To get the fishing rod, go to the island in the northeast in the northwest section of the map. Talk to him, he wants to meet a mermaid, ok so now kill off all of the enemies on the west side of the island then enter the cave. Now exit out and you will see the mermaid close to the bridge leading to the travelers house. Hit the mermaid with your boomerang. She will talk some. After that go and talk to Linebeck. After that go talk to the traveler, and the mermaid will be in the small pool. He thanks you with the Fishing Rod. Now go out to sea and catch a huge fish. Take it back to the traveler and he will like your catch. He rewards your catch with the Big Catch Lure. After you catch all of the fish (and the legendary Neptoona which appears as a swordfish symbol on your map) take them to the traveler to receive a Heart Container.

Go to the small island to the south of Mercay after beating the first dungeon. Go around to the cave on the island, follow the path to get around to the other side of the small hut where Eddo is. He sells you the cannon for 50 rupees

Buy it from the shop on Mercay Island for 80 rupees.

After you have enter the cave next to Oshus' home the first time, go back and talk to Oshus. Now go back and read the sign again. Now draw a "7" on the sign to make the door open. Now go and grab the sword from the chest

Get The Great Spin Attack

Go to the Travelers Ship in the northeast and defeat all of the enemies inside. After that try to leave when a man walks in. He tells you thank you. Talk to him again and pick the mysterious gift (don't worry you will get the normal gift too). The important gift is the New Hero's Clothes. Now take the clothes to the guy on the Traveler's Ship to the northwest. He will give you the Telescope in return. Now give the Telescope to the guy in the Traveler's Ship to the southeast to get the Guard Book, take the book to the Travelers ship in the southwest to get the Wood Heart. Now take that to the traveler in the Traveling Ship to the southeast. Talk to him some and then try to leave. He will tell you to wait and to meet him at his house. Go to his island in the northwest when you are attacked by a monster, defeat it then go to his house and open the chest for the Swordsman's Scroll. This is the Great Spin Attack. Ciela will suggest you try it, so go outside and try it to learn it! Phew!!!

Go to ds settings and change the day. Then go to Beedle and his stuff is restocked with new things! If you want you can repeat this over and over again to buy new things.

After you clear the mans yard of boulders, he will give you one rupee, then leave and come back and clear out his yard again, he then will give you a symbol on the map of a circle where a tree is, and says, "There is a tree in this location, Wack it hard. "Than go to that location and Barrel roll into the tree, the will shake and a big green rupee will then fall out of the tree. (worth 100 rupees)

We have no easter eggs for The Legend of Zelda: Phantom Hourglass yet. If you have any unlockables please submit them.

We have no glitches for The Legend of Zelda: Phantom Hourglass yet. If you have any unlockables please submit them.

How To Beat Bellum (Final Boss)

How to beat phantom linebeck

How to Beat the Temple of Wind!

Submit a cheat for The Legend of Zelda: Phantom Hourglass